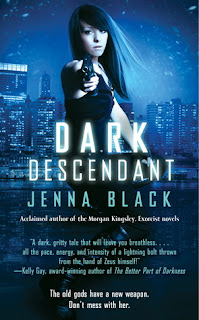 
Nikki Glass can track down any man. But when her latest client turns out to be a true descendant of Hades, Nikki now discovers she can’t die. . . . Crazy as it sounds, Nikki’s manhunting skills are literally god-given. She’s a living, breathing descendant of Artemis who has stepped right into a trap set by the children of the gods. Nikki’s new “friends” include a descendant of Eros, who uses sex as a weapon; a descendant of Loki, whose tricks are no laughing matter; and a half-mad descendant of Kali who thinks she’s a spy. But most powerful of all are the Olympians, a rival clan of immortals seeking to destroy all Descendants who refuse to bow down to them. In the eternal battle of good god/bad god, Nikki would make a divine weapon. But if they think she’ll surrender without a fight, the gods must be crazy. . . .

DARK DESCENDANTS is the first in a new series filled with action, twists and turn, special powers and Greek God Mythology. The main character Nikki is thrown into a secret world where she finds out that she is one of many descendant of  gods. Not only that but she is descended from Artemis which is very rare. She eventually decides to fight for the "good" side although there is much distrust in the group. She is loyal, and determined to stick to what she believes while earning her place. I enjoyed all the supporting characters, they brought so much more to the story with there different personalities. If your expecting romance you will be disappointed as there is none, I'm hoping for some in the next book between Nikki and a certain Death Magic user. The story is a bit dark, super fast paced and the world building is awesome. I think every Urban Fantasy fan should grab a copy and sit down to a great read.