Thank you to everyone that entered!!
PRIZE: One Kindle copy of My Frankenstein

Congrats!! I have emailed winner who has 48 hours to respond with mailing address or I will pick another.
Posted by StacyUFI at 10:30 PM No comments: 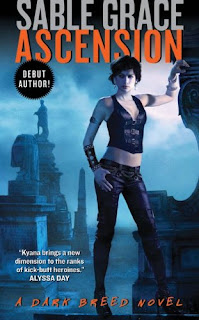 
The gates of hell have opened, and one woman will stand in the crossfire as the Dark Breed -- vampyre, demons, shape shifters -- and mankind fight their last battle for survival.

Kyana is half Vampyre, half Lychen... and the last of her kind. Determined, dangerous, and damned, she has no love for the mortals who have imprisoned and misused her. But when the Order of Ancients entrusts her with a mission -- to find the key that will send the Dark Breed back into Hell for eternity -- Kyana has no choice but to accept.

She is furious to learn her assignment comes with an escort... Ryker, a demigod and fierce warrior who long ago found a way under her skin and stayed there. In a shaky alliance, they discover an ancient cult with dangerous motive and a god who seeks to destroy all others. And as Kyana begins to feel the heat that threatens to bind her to Ryker, she knows she has to resist. For it could only mean the undoing of them both...

I really enjoyed Kyana as a character. She was strong, determined, and edgy. She really is a loner as she doesn't like to show her true self to anyone. She has to grow a lot and put some of her issues on the back burner to help save the world. The world building was great, I loved the descriptions and the different levels of the world that Sable Grace added to the story. The mythology was interesting, and complemented the plot really well. There is a TON of action, and I certainly never got bored. The romance was frustratingly good. Kyana and Ryker have a past and the terms that they went there separate ways on was confusing to both of them and misinterpreted on both sides as well which adds to there love/hate relationship. The ending was awesome, I so was not expecting that to happen even though it is great that it did. I'm excited to see where the series goes. ASCENSION was a great first release for a must read break out (team) author.