UFI welcomes Tracey O'Hara Author of the Dark Brethren Series here to tell us why she chose to write her series from multiple point of view's. Thanks for Joining us Tracey!! 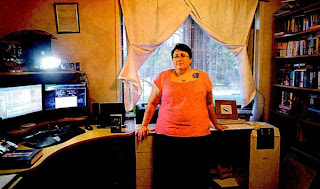 Tracey asked me what I wanted her to talk about and here is what I said.

I would love to know how you decided to use different main characters for each book instead of following 1 main character throughout the series and if it makes it harder to write a series that way.

From the beginning, I had intended that the Dark Brethren series would have different main protagonists. There are some wonderful series centered around a single heroine or hero. Charlaine Harris and Keri Arthur are masters as this kind of story. I have only read the first couple of books of both Kim Harrison’s The Hollows series and Vicki Pettersson’s Zodiac series and I really want to read more.

The fault of my short attention span is entirely mine. But to me the world that the Dark Brethren is set in is too rich and complex just to explore in one point of view.

At one point, about half way through writing Night’s Cold Kiss, I thought maybe I would make the series focus on Antoinette. But by the time I got to the end I was pretty sick of spending time with her. She is impetuous and immature in a lot of ways and sometimes I just wanted to shake her, but that is also part of her charm.

When it came to writing book two, I was concerned people would be disappointed that the book wasn’t focused on Antoinette and Christian. Some were. But most seem to be happy with the new main characters. But while Antoinette featured heavily, the second installment was just not her story. That is not to say Christian and Antoinette’s story is finished, not by a long shot. But for now there are more things to explore in the world the Dark Brethren are trying to take over.

In book two, I wanted to explore the shapeshifters of the world. And to do that I really need to tell it from a shapehifter point of view. In book 3 I am going to take a deeper look into the world of the magic wielders.

So what do you as a reader prefer? The same character/characters as the main protagonists or different ones?
__________________________________
Author Bio:
I was born in Australia - Launceston, Tasmania to be precise, but actually grew up in North and Far North Queensland. My family is very supportive of my writing. They encourage me to keep writing and pursuing my dream.
I discovered a passion for writing in March 2004. It started after doing some research into my family history. A story came into my head, screaming to get out, about an Irish girl who works for an English captain as a governess/nanny for his children while their mother is very ill. Set in Australia in the early 1820s.
But as I started to plot the story, another one emerged, which was much stronger. It involved the sister of the girl in the first story, who gets raped on the voyage out to Australia and falls pregnant. I wrote 120k in about 4 months – the story flowed out like molasses on a hot day.
This was before I learnt anything about writing, and I followed every bad writing practice known, making every writing mistake. But everyone loved the story – even if it was badly written. So I figured that I am more a story teller than a writer – so now I must learn to write. Now I am writing Dark stories, Dark Urban Fantasy to be precise.
In August 2004 I joined RWA and started to get involved with the Canberra group meetings. I haven't looked back. I joined RWA America early 2005
__________________________________
Find Tracey and her books
Website / Twitter / Facebook / Email
__________________________________ 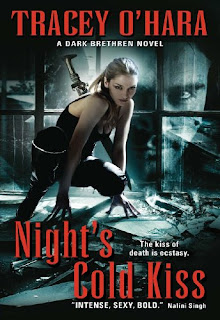 The tension between the Aeternus, an ancient vampiric people, and humanity has been mounting for over a century. But when rogue vampires begin to drain humans in order to achieve an illegal blood-high, all bets are off. After the death of her parents, Antoinette Petrescu devoted her life to becoming one of the top Venators, the elite hunters who destroy the rogue Necrodreniacs. Her kill count is legendary and her skills superb. But now the serial killer who killed her parents has returned. And to stop him Antoinette must join forces not only with the Aeternus, but also their most legendary killer. One that is both dangerously attractive, and involved in buried secrets of her past. More dangerous still, a dark attraction grows between them--one that could doom both races. 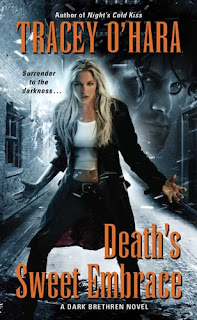 After thousands of years of secret conflict, humans and parahumans have reached an uneasy truce. But unspeakable evil now threatens to shatter the tenuous peace.

Teenaged shapeshifters are being slaughtered by a twisted, sadistic serial killer who rips their still-beating hearts from their paralyzed bodies. A task force must be formed to halt the madness—a union of avengers including the vampiric Aeternus, Christian Laroque and Antoinette Petrescu, as well as Kitt Jordan and Raven Matokwe, members of enemy Animalian tribes…and forbidden lovers.

A centuries-old blood feud has divided their peoples—pitting wolf against snow leopard in a battle to the death—and if their passion is discovered it will doom them both. But past hostilities must be put aside in light of the scourge that is now upon them. For the killer they seek is but the first sign of a blossoming terror rising up from their long-buried pasts: the all-consuming nightmare of The Dark Brethren.