Review: Magic on the Hunt by Devon Monk 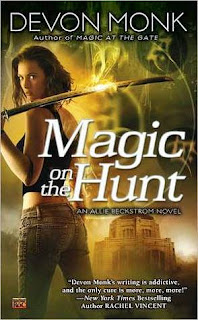 
There aren’t many girls who can say they’ve gone into the realm of death and lived to tell the tale. But to restore her lover Zayvion’s soul, Allison Beckstrom had to pay a bitter price–and things are about to get worse….

It turns out the leader of the Authority, the council that decides what can–and can’t–be done with magic, is being held hostage. But when the trail leads Allie and Zayvion to the secret prison where the Authority locks away magical criminals who are too dangerous to be held anywhere else, they find more than they bargained for. An undead magic user has possessed one of the prisoners, and he wants his freedom–and then some. Now Allie and Zayvion are the first line of defense against the chaos he’s about to unleash on the city of Portland….

The series just keep getting better and better. We learn about Allie and her memory loss not being because of her using magic, Zay shows a side of him we have not seen before, he seems harder then he used to be and a bit more harsh. Allie and her relationship with her dad seems to have changed a little bit and there isn't as much bickering going on. The Hounds get involved a bit. The only thing I am upset about is Allie still not having her personal inner magic thing back, I so want her to get it back and it bugs the heck out of me seeing her not have it and talk about the empty spot. The whole book was filled with tension, action and revelations. Everything is really coming together in the series and moving at a great pace.  Im not sure how many books are planned for the series but if they all continue on as well as MAGIC ON THE HUNT I will not miss one.