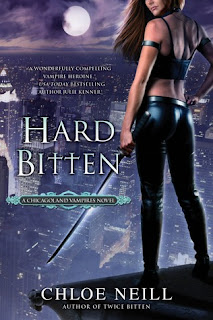 
Times are hard for newly minted vampire Merit. Ever since shapeshifters announced their presence to the world, humans have been rallying against supernaturals--and they're camping outside of Cadogan House with protest signs that could turn to pitchforks at any moment. Inside its doors, things between Merit and her Master, green-eyed heartbreaker Ethan Sullivan are ... tense. But then the mayor of Chicago calls Merit and Ethan to a clandestine meeting and tells them about a violent vamp attack that has left three women missing. His message is simple: get your House in order. Or else.

Merit needs to get to the bottom of this crime, but it doesn't help that she can't tell who's on her side. So she secretly calls in a favor from someone who's tall, dark, and part of underground vamp group that may have some deep intel on the attack. Merit soon finds herself in the heady, dark heart of Chicago's supernatural society--a world full of vampires who seem too ready to fulfill the protesting human's worst fears, and a place where she'll learn that you can't be a vampire without getting a little blood on your hands..

HARD BITTEN was a raw, action packed, suspense filled, emotional roller coaster. What a hot mess the vampires are in with the city of Chicago. Chicago does not want them around and they are not going anywhere. On top of all that Cadagon house is rebuilding their house after the big fight in book 3 TWICE BITTEN. Merit is also trying to deal with her "relationship" with Ethan, she doesn't know how to let him back in but she knows she wants him in her life. I have so many theories floating around in my head I want to talk about but so little I can say without giving away major spoilers. Just know there is a ton of twists and turns and your head will be spinning. The ending was truely the biggest surprise of all, I have NO clue what Chloe Neill is planning for Merit in the future But I am so there for the ride.

Tue June 14
The Demon's Surrender (The Demon's Lexicon Trilogy, #3) by Sarah Rees Brennan
Hourglass by Myra McEntire
Passion (Fallen, #3) by Lauren Kate
Trial by Fire (Raised by Wolves, #2) by Jennifer Lynn Barnes
The Revenant by Sonia Gensler
Wed June 15
The Uncertain Places by Lisa Goldstein
Please contact me if you see something is missing and I will add it. :)
Posted by StacyUFI at 3:00 AM No comments: