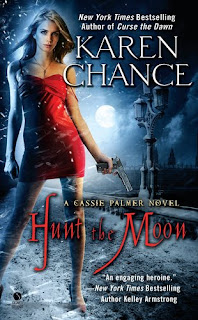 
Cassandra Palmer recently defeated a god, which you'd think would buy a girl a little time off. But it doesn't work that way when your job description is Pythia-the world's chief clairvoyant. Cassie is busier than ever, trying to learn about her power, preparing for her upcoming coronation, and figuring out her relationship with the enigmatic sexy master vampire, Mircea.

But someone doesn't want Cassie to become Pythia, and is willing to go to any lengths to make sure the coronation ceremony never happens- including attacking her mother before Cassie is even born.

Just like in all the previous books in the Cassandra Palmer series HUNT THE MOON is jam packed with action, fast paced, full of heart pounding situations and all around kick ass. Cassie still has people trying to make sure her job as Pythia never officially starts and she is doing everything she can to make sure it does.

If I get to far into my thoughts on the book I will give away way to many spoilers so I will give my thoughts on the characters and not on the happenings. Cassie continues to get multiple attempts on her life. She is always in danger and always fighting to get out of some trouble or another. She really is a fantastically written and strong character. Marcia is as protective and controlling as always. You can tell Cassie loves him but i think the over-protectiveness definitely makes her turn from him. Pritkin, I  LOVE Pritkin. I so cant believe how far he has come from the first book TOUCH THE DARK. I pretty much despised him in the beginning and now I cant imagine the series without him. I really think him and Cassie being together is going to happen I just dont know how it is going to get to that point or when. There is a huge cliff hanger like ending involving him and I'm DYING trying to figure out what the heck will happen next. You can never go wrong reading one of Karen's books her Dorina Basarab series (features Marcia's daughter) is just as fantastic. Book 6 can not come out soon enough.