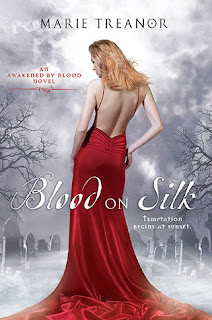 While in Romania researching historical superstitions, Scottish academic Elizabeth Silk comes upon the folk tale of Saloman, a seductive prince staked centuries ago, legend's most powerful vampire. Now, in the ruins of a castle crypt, Elizabeth discovers supernatural legends that have come alive. Her blood has awakened him. Her innocence has aroused him. But Elizabeth unleashes more than Saloman's hunger, and it's going to unite them in ways neither could have imagined.

I wasn't sure how I would feel about BLOOD ON SILK and it took me a really long time to even pick it up and read it. The book ended up being one of those OMG why did it take me so long to read you books. I enjoyed Elizabeth's character. She has a strong knowledge of the things she enjoys and has no troubles staying on course. When Soloman drops into her life she is torn between duty and desire. I wasn't sure about Soloman at the beginning but he slowly grew on me and became a favorite character of mine. The plot was well spaced out and played out in a way that kept me interested. I felt BLOOD ON SILK was a great start to the series. 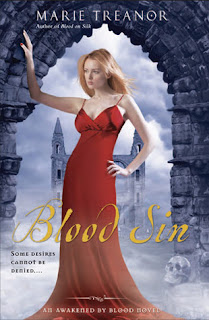 Months after her dangerous encounter with the vampire overlord Saloman, Scottish academic Elizabeth Silk is still trying to cope with both the demands of her vampire-hunting bloodline-and the desire she feels for Saloman, the immortal she brought back from the grave. But when Saloman's ancient sword becomes the object of a ruthless race between humans and vampires, Elizabeth must decide between unwanted loyalty, or unholy love.

I was pretty sad with how things ended in BLOOD ON SILK. They have so much chemistry together and it was hard to see them put that aside instead of finding a way to work together. Elizabeth has started tracking down her fellow descendants of Tsigana which leads her to find Josh a movie star that happens to be a far off relation to her. Josh became another great supporting character to the series while also bring Elizabeth into a situation where she runs into Soloman again. The pace was on the same level as book 1. The romance was just as high and the situations were just as pleasantly intense. I m excited to see what will happen in BLOOD AWAKENING to bring Soloman and Elizabeth even closer.  BLOOD SIN was another great book in the Awakened by Blood series. 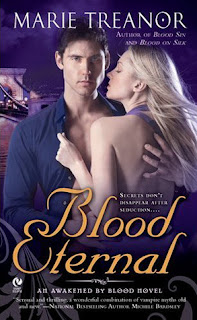 Despite the growing passion that unites them, all is not well between Elizabeth and Saloman. She refuses to follow him as he builds his influence among the human population and consolidates his rule over the vampire world. A shocking revolt is just the latest crisis that's call him away.

Even after everything that has happened Elizabeth is still a bit torn between duty and love. Her and Soloman are made for each other and that has been apparent since book one. Elizabeth has always held herself a bit back and talked her self out of taking the needed steps to make the relationship work. BLOOD ETERNAL turns all that around and brings them together much more closely then they have beem. There is some fantastic action and suspense in BLOOD ETERNAL. Friends need to make final choices as to who they will support and stand behind. Elizabeth comes into her talents more then she has in past books. The romance between Soloman and Elizabeth continues to be steamy. I really felt that Elizabeth did a great job with staying true to herself and her beliefs while working with everyone's best intentions in mind. BLOOD ETERNAL ends on an exciting note and I really want to know what happens next but it looks like the series is over :( I definitely think there is a lot of story left and hope it continues some time.

I have really enjoyed the series as a whole and had no issues reading all 3 books back to back.
Posted by StacyUFI at 3:00 AM