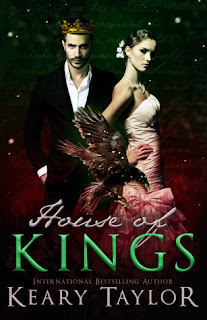 
Alivia’s father left her a letter before he died, begging her to stay away from the King and the Royals. But it was a plea made in vain. She never could have run from this life, not when she might be Cyrus’ resurrected queen. The King has arrived in Silent Bend and with him, he brought the end to Alivia’s mortal life.

Uncontrollable bloodlust and an ever-shifting world rule her nights now. These twisted politics are deadly enough, but now her heart is the newest battleground. There’s no hiding from the one who hates everything she was born to, a spy who embraces everything she’s become, and a King who vies for someone she may soon remember.

The games have begun. The House of Conrath is growing. Blood will be shed, the bodies will fall. Alliances will be tested and old enemies look like harmless children compared to the new ones rising from the shadows.


The Kings arrival has been much anticipated and his visit in HOUSE OF KINGS didn't disappoint.

Alivia is now a vampire and the King has arrived to help her get her house in order. Alivia has brought in a lot of allies and they're all as ready as they can be for the Kings visit, but it's just as hard as they expected. There are a lot of twists and turns thrown into HOUSE OF KINGS and a lot of drama. The bitten vampires are adding to the drama by continuing to kill and turn townsfolk. The story line continues to intrigue me and the characters continue to develop.

**Small spoilers ahead, I don't mention names, but I mention my reaction to events that happened in HOUSE OF KINGS without giving all the details** Alivia made some pretty questionable choices in HOUSE OF KINGS and her choices led to someone really close to her leaving and moving on from her life. I have to say that this person leaving really broke my heart for Alivia. I don't know if she will ever get this person back, but I hope so. I was also really surprised by her allies at the end of HOUSE OF KINGS. I think they should have known better and I just didn't understand their reactions towards Alivia **End of spoilers**

I can't say I'm surprised by the ending events of HOUSE OF KINGS because it just seems like something that would happen after the King gets through with The House of Conrath, but I can say I was surprised by some others reactions. There is no way that I won't be reading HOUSE OF JUDGES in June.