UFI welcomes Author Casey Wyatt. Thanks for Joining us!!

Don’t be Boring And Other Advice, By Cherry Cordial

Cherry Cordial here. I snuck onto my mortal servant’s laptop and erased the tedious blog post she’d written. She seems to have forgotten my number one pet peeve – don’t be boring.

Normally, I would never presume to tell someone else how to live their life but because I’m basically immortal, I’ve learned a thing or two. Plus, when you live on Mars with a colony of  undead space nerds, these ground rules make the time pass more smoothly.

Here goes, or as the good Doctor says, “Geronimo!”
Sorry (not sorry) if I’ve purposely left some of my tips vague but I don’t want to give away any spoilers from my latest adventure (Psssst – that would be Dead Girls Don’t Sing!).

Thanks for listening and thanks to Urban Fantasy Investigations for hosting me. Do me a solid and let’s keep this a secret between us. Casey doesn’t need to know I erased her stuff.

If you have a question fire away in the comments section.

Casey Wyatt grew up in a mid-size Connecticut town where nothing exciting ever happened. To stem the boredom, she read fantasy and sci-fi stories, imagining her own adventures in her head. Not much has changed since she’s grown up, only now she's a multi-published author of paranormal romance and urban fantasy novels. In her spare time, she loves all things geeky, hangs out in museums, and collects stray cats.

To receive advance notice about new releases and special sales, subscribe to Casey's Newsletter at www.caseywyatt.com 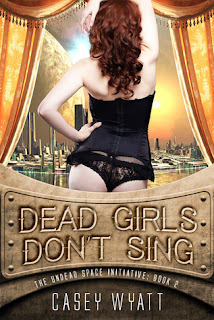 
When former vampire stripper Cherry Cordial settled on Mars with her undead family, she thought she’d left her chaotic past behind her. After finding her mate and becoming the first vampire to give birth, she’s hoping to lead a drama-free life.

Naturally, the universe has a different plan. When mysterious undead space travelers arrive, an ancient Martian plague is released, infecting the undead. To find the cure she must return to Earth. All she needs to do is travel into the past, confront her own tangled history, and not break the space-time continuum. But if Cherry’s learned anything, it’s that her life is never that easy.