UFI welcomes Kasey Mackenzie Author of the Shades of Fury series. Thanks for Joining us!!

I often write longhand in notebooks when my “muse” (okay, subconscious) decides to be stubborn, which is preferable to staring at a blank screen contemplating competuricide. I also have a colored pen fetish – I prefer teal, turquoise, and purple – and am always looking for great pens in those colors. (Shout out if you have any favorites that fit this description!)

Playing board games with my son, playing computer games with my husband, and knitting (although I’m still very much a beginner). I also love scrapbooking and playing softball. I really love going to conventions and meeting other writers and readers, but finances required me to limit my appearances this year. Drat the luck!

I think that world-building and characterization are my favorite parts. I do a little bit of both at the outset of a new project, but mostly I’m a “write by the seat of my pants” (AKA pantzer) writer and these come out organically as I write. I have a blast discovering things as I write, just like my readers hopefully enjoy discovering plot and character elements as they read. Of course, pantzing also means I have to go back and layer in foreshadowing after the fact quite often, so it doesn’t seem like things came out of “left field”—although technically, for me they did. Gotta love how the subconscious mind works!

As I mentioned above, if I’m having trouble feeling creative writing on the laptop, I switch to writing longhand with “pretty” pens in “pretty” notebooks. The one absolute constant when I write is that I have listen to music. Thank goodness for iTunes!

What are some of your Favorite books or Authors in the Urban Fantasy/
Paranormal Genres?

How would you pitch your books to someone who has not heard of them before?

She’s a Fury from mythology who works for the Boston Police Department. He’s a shapeshifting Warhound mercenary who drives her crazy in more ways than one. Together, they fight (supernatural) crime! Okay no, that’s not really how I’d pitch it, but it’s not far from the truth.

Can you tell us a little bit about the world that The Shades of Fury Series is set in?


Sure! My world is what many would call an “open” versus a “closed” urban fantasy in that the supernaturals are “out of the closet”. I consider it a near future alternate version of our own world. Arcanes (my name for supernaturals based on their “official” Latin name, Gens Arcana) have always moved in and out of the mortal realm at their own whim, with some settling permanently among humanity, but mostly in secret. That all changed 50 years before Red Hot Fury, when the arcane realms began dying and arcanes started immigrating to the mortal realm en masse. Some of the arcanes, led by the super- arrogant Sidhe, decided they weren’t content to remain hidden and wanted to rule over their mortal playthings if they had to stay here, so they started a war. Unfortunately for them, mortals had vaster numbers and technology on their side, so the war didn’t go at all the way they planned. Fortunately, the Furies—who start out mortal before their arcane blood kicks in at puberty and straddle the fence between mortals and arcanes—were finally able to hammer out a Peace Accord between the two groups and now they live in an uneasy balance. The scales have been tipped in the favor of the mortals by virtue of their greater population and ruling the governments, but things are slowly starting to change.

Do you have a favorite scene in Green-Eyed Envy?

Wow, good question…Green- Eyed Envy was a book of “firsts” for me. First finished sequel, first book written to deadline, first book written that was already sold, and first straight-up murder mystery. Some readers hated that they easily figured out who the villain was in the first book, but Red Hot Fury wasn’t intended to be a mystery to us—instead, it was about Riss figuring out who the villain was and how that realization impacted her. In Green-Eyed Envy, however, it is very much a murder mystery where (hopefully) the reader is just as surprised by the identity of the villain as Riss is. I think my favorite scene is where we actually see Riss discover just who that is, and how she grits her teeth and wades in to take that person down.

Riss is absolutely my favorite character. I love that she can be both hard and soft, both feminine and “tomboyish,” both arrogant and insecure, both snarky and sensitive…She’s a contradiction in qualities sometimes, just like every person under the sun. I hate flat, two-dimensional characters or Mary Sues who are perfect (or think they are). Riss has her flaws and they hang out there quite clearly, but at heart she’s someone who cares very deeply for other people of ALL kinds and she’s willing to lay down her life for them if she has to. Though obviously, she would way rather not. The hardest character to write about…Hmm. I’m not sure I have a hardest to write about. I even enjoy writing about the villains because to me, they’re just people who have opposing goals to my MC, even when they have ruthless or conventionally “evil” goals in mind. It’s all about perspective.

Next year you’ll be able to read the third book in Shades of Fury, Black-Hearted Betrayal, which builds
on events from both books 1 and 2. In that book we’ll learn a lot more about the Fury world and the three classes of Furies. We’ll also see some Immortals (real Immortals, not just arcanes) and of course, Riss will have to go through a lot of emotional and physical trauma before she makes it to her happily-for-now. (Ultimately she WILL have a happily-ever-after whenever the series ends, but she’s gonna have to work really hard for it!) I have a YA urban fantasy my agent is shopping right now which has a Djinn (i.e. genie) MC who has to track down her lying, murdering ex of a boyfriend and also comes up against an evil undead Djinn. Hopefully, that one will sell! Other than that, I have a lot of projects (mostly urban fantasy with some post-apocalyptic fantasy) that are in various stages of completion.


__________________________________
Author Bio: Kasey Mackenzie lives with her husband and son in St. Louis, Missouri; home of the Gateway Arch, the baseball Cardinals, and the world’s greatest thin-crust pizza.  Kasey was one of those students who always had her nose in a book—so no big surprise when she was voted “Teacher’s Pet” in her high school yearbook.  Today, she is a voracious reader of fantasy, romance, suspense, and “soft” science fiction.  She adores her German shepherd puppy, two cats, playing softball, and has recently taken up knitting.  So far she can cast on, do the knit stitch, and cast off.  Hey, it’s a start! 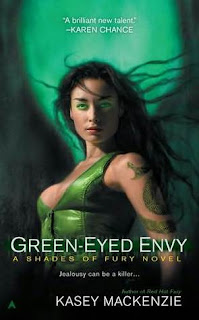 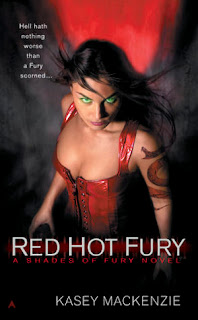 As a Fury, Marissa Holloway belongs to an Arcane race that has avenged wrongdoing since time immemorial. As Boston's chief magical investigator for the past five years, she's doing what she was born to do: solve supernatural crimes.

But Riss's investigation into a dead sister Fury leads to her being inexplicably suspended from her job. And to uncover the truth behind this cover-up, she'll have to turn to her shape-shifting Warhound ex for help.