UFI welcomes Ada Adams Author of ReVamped. Thanks for Joining us!!

I love chocolate. Okay, you probably already knew, but it’s true. If I could, I would eat chocolate for breakfast, lunch and dinner.

I have been in both a zombie movie and a werewolf movie. Sadly, not a vampire one yet!

On that note, I adore scary stuff. Halloween, horror movies, haunted houses – you name it. It’s kind of funny, because I’m the biggest scaredy-cat ever. The haunted house guys with chainsaws always find me and chase me, because I’m the one screaming the loudest. I think one of the scariest things that I have ever done in my life was explore an abandoned hospital.

I am a big film and TV junkie. However, I don’t have a favorite film, TV show, book, or song. My list of favorites is very long and diverse, as I like various genres that cannot be easily compared.

I also love to read, although when I am working on a project, I have to take a reading solstice. Partly because I don’t wish to be influenced by other authors’ works, but mostly because I would spend ALL of my time devouring the books and wouldn’t do any actual writing of my own!

I act, which is yet another great way for me to escape into fun, imaginary worlds. I’m also an editor of a global fashion/literary magazine called VEUX Magazine. I greatly enjoy travel and photography (only as a hobby, of course). I’d love to explore the world and take pictures of unique, unusual places. As well, I love spending time with my family, friends, and puppies (Oreo and Cara(milk) – I told you I liked chocolate).

I really enjoy when my own characters surprise as I’m writing. Sometimes, their personalities and emotional states lead the story in a certain direction. However, it’s scary when a villain does something unpredictable. One of the most pivotal points in “ReVamped” came from the horrible actions of villain. I hadn’t originally intended the story to go in that direction, so it was very surprising not only to me, but also to poor Dawn.

Although I do my best writing work early in the morning or late at night, I don’t always write at a particular time of day. I do prefer to write on the computer in my office, and don’t do much writing while on the road. I often don’t eat when I’m in a big writing frenzy, so I have to ensure that I somehow get fed. However, when I’m stuck on a part of a story, I snack a lot. Even though I love listening to music, I always have to have complete silence when writing. Most my best ideas come at night (at 3:00 a.m.), or while I’m in the shower. Weird, right?

I honestly have too many to name, and I’d feel too bad about leaving someone out. However, I’m kind of behind on the most recent (2011/2012) releases. I took a reading break from the Fantasy/Paranormal genres while writing “ReVamped”, so I currently have a huge list of book that I must catch up on!

How would you pitch Revamped to someone who has not heard of it before?

“ReVamped” is a YA Paranormal novel, with a little bit of romance, and a lot of action, adventure and humor. It tells a story about a vampire girl, Dawn, who is responsible for revamping a group of misfits (think about everything you know about vampires and then reverse it and you get this gang). Upon Dawn’s arrival to a small town of Angel Creek, she realizes that there is a lot more going on than meets the eye. Throw in a couple of hot guys, an evil villain and a secret from the past, and Dawn soon finds out that she’s in for a lot more than she bargained for!

Can you tell us a little bit about the world that Revamped is set in?

In the spring of 2012, due to a love-of-all-things-vampire mania brought on by the emergence of popular novels, television shows, and films glorifying the vampire race, vampire citizens all across the United States were finally free to walk in the light. Three years have passed since then (“ReVamped” takes place in 2015), and the vampire obsession has only grown stronger. In “ReVamped”, vampire and human citizens coexist peacefully. In fact, humans are so enthralled by vampires, they often view them as celebrities – (Transylvania Shore anyone?). I wanted to keep the world as close to the world we know today, while also answering the question: “What would happen if vampires really existed”?

Do you have a favorite scene in Revamped?

I love all the scenes with the misfits, because the gang is just so funny and, well, kind of pathetic. In the future books, we will get to explore a lot more of their pasts and lives, so I think that the readers will get to know each of them on a more personal level.

The scenes with Dawn and the boys (Sebastian and Ethan) also kind of make me laugh. She’s so confident and so sure of herself in so many things, but when it comes to guys, she’s kind of a mess. She spends a lot of time in “ReVamped” trying to hide her feelings, so on certain occasions (like when she drinks the Blood Vodka and tackles Sebastian), I was quite amused.

One scene that really moves me is the “Crimson Liner” scene (I’m dubbing it that in order to keep form giving any spoilers). I had a hard time writing that, especially because of what happened prior to that. However, I really enjoyed the way it turned out.

Dawn, being the protagonist, was definitely my favorite to write about. At the start of the novel, she seems like a pretty tough, straightforward kind of girl, but once she’s faced with the events in the novel, things quickly unravel for her, showcasing more of her weaknesses. At the same time, she definitely changes and grows. Seeing her come into her own and writing about it, was definitely one of my favorite things in regard to the novel. I also really liked writing about Brooke. I know that many people probably don’t love Brooke’s attitude, but every time I wrote about the misfits, I just had a huge smile on my face!

One of the hardest characters to write about was definitely Sebastian. He was harboring a few pretty heavy secrets (mind you, most of the characters were!) that were in a way stifling his personality. I’m so excited for “ReAwakened”, because a lot is out in the open now, so we will get to explore the dynamic between Dawn and Sebastian on a much deeper level, as well as get to meet some fun new characters!

"Many people sing in the shower. I, on the other hand, write scenes in my head and act them out."

At age five, Ada read her first chapter book - Pippi Longstocking. Ever since that moment, she developed an intense passion for the stories and characters found within the pages of literature.

In her career as an actress and a writer, Ada currently spends most of her days immersed in imaginary worlds. Much like the characters she enjoys playing and writing about, Ada is a martial artist with a Black Belt in Shotokan Karate. She is also a big proponent of lifelong learning, and has attained Bachelor of Arts in Psychology (it aids in creating characters with unique quirks!) as well as a Master's of Science in Education.

Ada strives to bring a fresh voice and perspective to fiction. She has been writing creatively for many years. "ReVamped" is her debut novel. 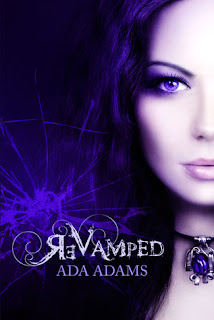 Nineteen-year-old vampire Dawn has led a sheltered life within the confines of her father’s presidential headquarters. Upon being sent on a mission to revamp four goofy misfits into guardians of a peaceful little town of Angel Creek, Dawn believes that all her dreams have finally come true. What starts off as a simple task, turns into something unexpected, changing Dawn’s life forever and leading the action-loving, thrill-seeking vampire teen on a path of mystery, danger and intrigue.

When a human girl is kidnapped by a group of rogue vamps, Dawn discovers that there is more going on in Angel Creek than meets the eye. And it all connects to Ethan, the cute newcomer who seems too perfect to be true, Sebastian, the mysterious vampire with a turbulent past, and even Dawn herself. Dawn must not only succeed in revamping the troubled recruits, but must also prevent the vampire race from being overtaken by a malevolent villain who has a strange and obsessive fascination with her. As threat escalates, romance blooms, and ghosts from her past begin to surface, Dawn is sure of only one thing: her life will never be the same. 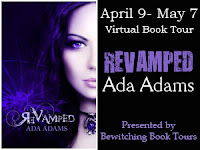