Can you tell us a little bit about the world Unhuman Light is set in?

Shared mythologies in cultures across the world has to mean there’s something to the myths – right? My muse tried to figure out how those not-so-mythological beings might have adapted to live in our modern world, where a huge percentage of humans have a camera phone ready to document anything unnatural. Not that I believe werewolves and vampires are real, but if they were, pretending to be human would be more important than ever in our modern world. Vampires, werewolves, and the members of the various pantheons — what might their lives look like today?

And what about dragons? How were they never real? And what if there were shapeshifter dragons who survived after all of the real ones were killed? How would they survive when their species doesn’t exist anymore?

The actual writing: butt in chair, fingers on keyboard, brain in another dimension.

Before I start a novel, I know the characters inside out, I know the basic conflicts, and I know the general plot. I have an idea of the ending, but I don’t know exactly what will happen on the way to the end. I often don’t know a character is going to say something until I read it on the screen, and then everything shifts, new possibilities open, and my fingers fly across the keys while they try to keep up with my thoughts.

I can’t listen to music with words while I write, so I usually write with classical music playing in the background.  I let the dogs out to potty, let them back in, make sure they have food and water, make sure I have plenty to drink, and then I get started. Oh, and I turn the internet off on my laptop. Otherwise all the social media dings will distract me. I use my phone for most research, but it’s easy enough to turn wi-fi back on if I need something more in-depth on my laptop.

I have a small desk and desk chair, but I often write in my recliner on my laptop. That’s it — no special formula other than reduce distractions and get down to it. The book won’t write itself.

My absolute favorite series right now is the Jane Yellowrock series by Faith Hunter. I also enjoy the Kate Daniels series (Ilona Andrews) and anything in the Night Huntress World by Jeaniene Frost.

The first three books in Chronicles of the Light will be released during the first half of 2019, and I expect book four won’t be far behind. I hope readers will come along on this adventure with me. 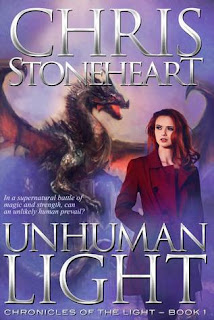 
Bodies keep piling up, but Kaitlin O'Malley refuses to back down, even when threatened by someone once worshipped as a god. Training for a battle between good and evil, she teams up with the Dragon King and a powerful lion, and finds herself protected by a Master Vampire who wants her in his bed. 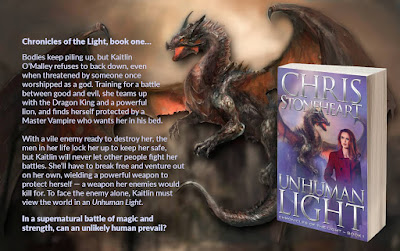 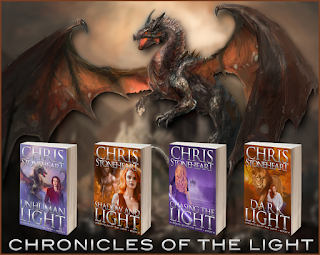