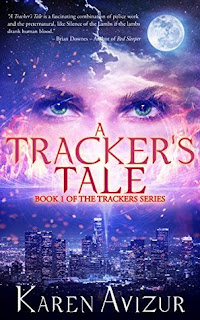 
A TRACKER'S TALE was one of those stories that I didn't expect much of going into, but quickly grabbed my attention and I wished I had more to read when it was over.

I really enjoyed Katherine. She was hilariously bad-ass with a fantastic personality. Her being a mom brought another interesting factor to the story. Her daughter is pretty bad-ass on her own and I enjoyed getting a few parts of the story from her POV. They had a pretty great bond and I look forward to seeing them work together in future books. Katherine's partner was easy to like. They are new to each other, but their personalities seem to mesh well and they worked well together. Their introduction to each other was pretty entertaining.

The plot was balanced nicely between Katherine's everyday happenings and the mystery of the storyline. I enjoyed the investigation just as much as seeing Katherine's struggles on the home front. You really get a feel for just how awesome Katherine is when she confronts the bad guy at the end of A TRACKER'S TALE. They had no clue what they were getting into when they messed with her family and watching her put them in their place was truly something else. I'm sure they will clash again in the future and I honestly can't wait for that to happen. I'm positive that it will be highly entertaining.

A TRACKER'S TALE was a great story with great characters that left me wanting more. I will add book two to my wishlist as soon as I see it up on Goodreads. Fingers crossed that it won't be too long until it comes out.