UFI welcomes Author Debbie Peterson. Thanks for Joining us!!

Music is a must have for me when I write. In fact, I cannot write without it. From various conversations I’ve had as well as blog posts I’ve read, it seems that most authors can have all kinds of music playing in the background. I’m not quite that lucky. If I play a song with words, no matter how appropriate for the chapter, I start singing along. This is very distracting and can be a little dangerous because I sometimes write the lyrics while a character is having an important conversation with another character. This. Is. Not. Good. Alas….

Anyway, I do have several playlists and make new ones all the time. They are all mood specific. However, I do have a few favorites that usually find their way on almost all my playlists. So, here are the top ten instrumental songs I used while writing Heart of the Storm!

6.  The Grey Havens - Lord of the Rings Return of the King Soundtrack

8.  For the Love of a Princess - Braveheart Soundtrack

9.  Gift of a Thistle - Braveheart Soundtrack

10. Nightengale - Yanni from the Yanni Album 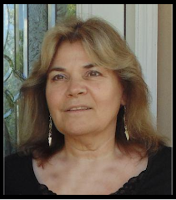 Debbie is an author of paranormal and fantasy romance. She has-and always has had-a soft spot for fairy tales, the joy of falling in love, making an impossible love possible, and happily ever after endings. She loves music, art, beautiful sunrises, sunsets, and thunder storms.

When she's not busy conjuring her latest novel, She spends time with the members of her very large and nutty family in the lovely, arid deserts of southern Nevada. She also pursues her interests in family history (which she also teaches), mythology, and history. 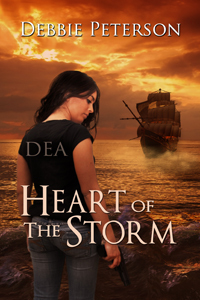 
DEA agent Aliyana Montijo must stop a drug lord's killing orders and find a government mole. With a contract on her head, she trusts no one. While heading back to Florida with evidence, lightning strikes her plane. As it careens into the ocean, she thinks she sees a pirate ship. What she finds is a dashing and most unlikely ally.

Four centuries ago, Wolfaert Dircksen Van Ness captained a vessel for the Dutch West Indies Company. Then an unearthly storm in the Bermuda Triangle blew him into a parallel dimension. After rescuing Aliyana from a similar tempest, he finds himself drawn to the courageous beauty and wants to aid her mission.

In the midst of danger, the two find themselves falling in love. Then a misunderstanding tears them apart, perhaps forever…


About a half an hour before sunset, the unease she had carried for the past several hours turned into a sudden feeling of dread. Panic overtook all rational thought and settled into her soul. Something terrible had happened. She raced toward her supplies and grabbed her backpack. Her fingers shook as she unzipped the bag and yanked out her phone. She called Greg’s number several times over before it dawned on her that he had already boarded a plane headed for Colombia. She wouldn’t be able to contact him until the morning.
Despite all attempts to banish it, the dread grew stronger with each passing hour. A growing notion that Wolf and his crew never left the sub took firm hold. The conscientious men of the Wieven could very well have remained behind to ensure that all went according to plan. The thought of such an occurrence made her sick to her stomach. What if they could die as she had always feared? What if they died in that sub along with Mercado’s men? She couldn’t sleep, and she couldn’t eat. All throughout the long hours of the night, she restlessly paced along the shore, waiting, hoping, and praying.
By the time the gloomy morning arrived, what little hope she’d carried throughout the long night dissipated. Somewhere in her heart, she finally accepted that her beloved captain wouldn’t be coming for her. Not now. Not ever again.