UFI welcomes author Larissa Ione! Thanks for joining us!!

First, hello, and thank you for having me! And wow, good question! I guess something that might surprise readers is that although I spent much of my pre-author life as a meteorologist and EMT, I actually majored in Criminal Justice in college. After years of that, I ended up not even going into that field. It’s why I’ve told my son that if he doesn’t want to go to college right away after high school, I’m fine with that. I wasted a lot of time and money because I was invested in a career field I didn’t even go into. I don’t regret it – I do believe that my choices, even my poor choices, led me to where I am now. But it was a hard road I’d encourage my son not to go down!

I love video games, so I play a lot of those. Usually I play fantasy RPGs on the computer, but I’m currently obsessed with Star Trek Trexels on my iPad. I also enjoy boating, reading, and watching movies.

I enjoy the brainstorming. I don’t like plotting, but I love daydreaming about the characters and figuring them out. I also like typing The End!

Nope. There are places where I prefer to write – the living room, the bedroom…anyplace I can put my feet up and have my computer on my lap. I hate writing at a desk even though I have my own office.

My very favorite Urban Fantasy books belong to the Riley Jensen series by Keri Arthur. I love those! I’m so sad the series ended. I’m also a big fan of Lara Adrian, Gena Showalter, Laura Wright, and Alexandra Ivy, just to name a few. I’ll pretty much read anything paranormal!

How would you pitch the MoonBound Clan Vampire series to someone who has not heard of it before?

Imagine a world in which vampires are out of the closet, but thanks to humans and their superior numbers, anti-vampire weapons, and vampire in-fighting, vampires are hunted and enslaved. But the situation isn’t all dire – free vampires are starting to organize, and it may only be a matter of time before they are at the top of the food chain once and for all…

Can you tell us a little bit about the world that the MoonBound Clan Vampire series is set in?

Sure! It’s a very contemporary world, set slightly in the future. Most of the free vampires live in clans that are steeped in Native American lore (because in this world, vampires originated with Native American tribes.) Vampires can be born that way or turned from humans, but turning is rare, thanks to a vaccine against the vampirism virus.

Do you have a favorite scene in Chained by Night?

I have several, but I’ll narrow it down to a scene where the hero, Hunter, gets into it with another purebred (born) vampire named Myne. Those two have an antagonistic relationship, and it comes to a head in this book. I loved writing it!

Of all of my books, I’d say Wraith from the Demonica series has been my favorite to write, but the above-mentioned Myne is going to be another who really grabs me. Both are very easy to write, and their personalities just sing to me. The hardest? That would be Reaver, also from the Demonica series. He was easy as a secondary character, and still is. But writing his book was hell. I’ve discovered that angel heroes and heroines are REALLY hard to write, I think because you have to be careful to strike a balance between good and not TOO good. 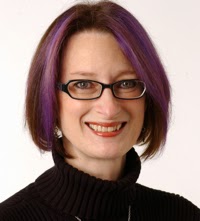 Air Force veteran Larissa Ione traded in a career as a meteorologist to pursue her passion of writing. She has since published dozens of books, hit several bestseller lists, including the New York Times and USA Today, and has been nominated for a RITA award. She now spends her days in pajamas with her computer, strong coffee, and supernatural worlds. She believes in celebrating everything, and would never be caught without a bottle of Champagne chilling in the fridge…just in case. She currently lives in Wisconsin with her U.S. Coast Guard husband, her teenage son, a rescue cat named Vegas, and her very own hellhound, a King Shepherd named Hexe. 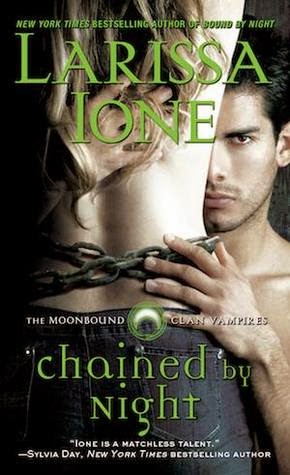 THE FUTURE OF HIS TRIBE
Leader of the vampire clan MoonBound, Hunter will do what he must to save his people from extinction—or worse, a torturous eternity as vampire slaves and subjects of human experimentation.To keep his enemies at bay, he has agreed to mate a rival clan leader’s daughter in return for peace between the clans and an ally in the looming war with the humans.