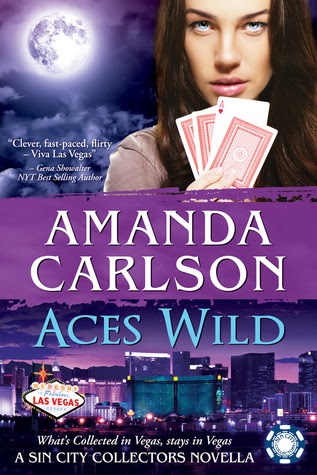 
Looking for a short paranormal romance? Set in Las Vegas? With both vampires AND shifters? Well your in luck! ACES WILD is the first novel in the new Sin City Collectors Series.

Nevada has done everything possible to forget that one night she had with Jake three years ago. She has kept her distance and is doing fine until he ends up as her new partner for her next collection. Not happy about it she pushes him away while wishing she could hold him close.

The attraction between Nevada and Jake is instant so you don't really understand her hate for him. As you learn a bit more about their past together you get to understanding Nevada a bit more which helps you see through the wall of attitude she puts up. Watching the two get over issues that neither of them could control makes the romance much more believable and enjoyable. Don't worry, romance isn't the only thing going on in ACES WILD, the collection ends up being way more personal than either of the characters could have imagined.

Although ACES WILD is novella length, Carlson does a great job of introducing us to the new world of Sin City Collectors and giving us the back story between her characters. There is a surprising amount of action to be found as the conflict gets pretty heated. ACES WILD was a great start to this new and unique continuity novella series and I look forward to reading the next chapter QUEEN OF HEARTS by Kristin Painter.