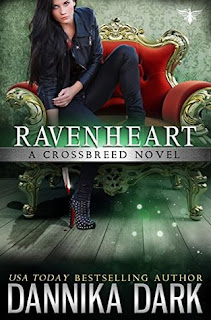 “WE ALL HAVE SECRETS, RAVEN. DARK ONES. EACH AND EVERY ONE OF US.”

Two weeks after joining Keystone, Raven Black is ready to take on the world as a criminal hunter for hire. If only her partner wasn’t a bloodsucking Vampire with a penchant for getting under her skin. Despite her lavish surroundings, Raven misses the freedom of life without rules. And Keystone’s next assignment is about to test her self-control in more ways than one.

Dead bodies are popping up in the human district, and all signs point to a Breed serial killer. In order to catch him, Raven and Christian embark on a mission that takes their partnership into uncharted waters. Lives are at stake. Can Raven trust her instincts, or will she fall into a web spun from lies and deceit?

Time is running out in this pulse-pounding tale of dark secrets, murder, and forbidden desires.


The one thing that really stuck out for me in RAVENHEART was the character development. We get to learn more about the pasts of those involved in Keystone. Not a ton, but it was enough to help me get to know the characters better. I still enjoyed Raven as a character, but I didn't find her to be as tough and kick butt as she was in RAVENHEART. She was also missing the confidence I saw in KEYSTONE.

There was a small side romance between Raven and a character not involved in Keystone. It was a bit awkward and I wasn't crazy about it, but that's probably because I still have my fingers strongly crossed for something to happen between Raven and Christian. There is so much chemistry and tension between them that it just needs to happen already.

The storyline wasn't as strong as KEYSTONE was. The bad guy wasn't immediately clear to me, but it didn't take long and there wasn't as much mystery involved when it became obvious and the excitement level went down for me.

Although RAVENHEART wasn't a direct hit for me, I still want to know more about the characters and world enough to add book three, DEATHTRAP, to my wishlist. Fingers crossed I like it as much as book one.