UFI welcomes Author Fran Wilde. Thanks for Joining us!!

I can’t abide okra. It’s my least favorite vegetable and I recoil at it like I recoil from slugs, which are also on my No-Way-No-How-What-Fresh-Hell-Is-This list. Unfortunately, I have okra fiends in the family, and live in what seems to be a slug-sanctuary. Que Sera.

Cooking with family and friends. Sailing – the kind that involves flip-flops, a cheap fiberglass dingy and a rocky beach, not the designer-whites and champagne. Traveling to new places, whether it’s down the street or across the globe.

When the story clicks. When the characters take over and start writing the story themselves. That’s the best part.

I try to write first thing in the morning, before I do anything else. With a family that’s hard, and requires getting up early (and I’m not by any means a morning person). Still, once I’ve done 500 words or so before anything else makes demands on my time? I find I can more easily get back into it after returning work/client emails, addressing school & family stuff, and the inevitable –stop what you’re doing and do this- emergency that happens mid-morning more often than not.

How would you pitch UPDRAFT to someone who has not heard of it before?

In a world of wind and bone, songs and silence, secrets and betrayal, laws are broken and the consequences will change one city forever.

Can you tell us a little bit about the world that UPDRAFT is set in?

Updraft is set in a city of living bone, high above the clouds. The ground, and the past, are lost to legend. The city’s inhabitants fly on manmade wings, or cross perilous bridges to exchange necessities. But monsters hide in the wind, and the city must be appeased.

Do you have a favorite scene in UPDRAFT?

I have a bunch of favorite scenes, but one of the earliest is when Kirit breaks the law called Fortify, and encounters one of the above mentioned monsters face-to-teeth.

Kirit is a favorite. As is Nat – her best friend. I think Rumul was hardest to write about because I needed to show his depth and fears, and he’s cagey. 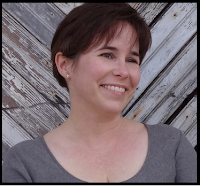 Fran Wilde is an author and technology consultant. Her first novel, Updraft, is forthcoming from Tor/Macmillan in 2015. Her short stories have appeared in publications including Asimov’s, Beneath Ceaseless Skies, Nature, and Tor.com (Bibliography.). Her interview series Cooking the Books–about the intersection between food and fiction–has appeared at Strange Horizons, Tor.com, and on her blog,  franwilde.wordpress.com. 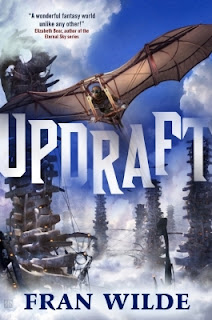 
In a city of living bone rising high above the clouds, where danger hides in the wind and the ground is lost to legend, a young woman must expose a dangerous secret to save everyone she loves

Welcome to a world of wind and bone, songs and silence, betrayal and courage.

Kirit Densira cannot wait to pass her wingtest and begin flying as a trader by her mother's side, being in service to her beloved home tower and exploring the skies beyond. When Kirit inadvertently breaks Tower Law, the city's secretive governing body, the Singers, demand that she become one of them instead. In an attempt to save her family from greater censure, Kirit must give up her dreams to throw herself into the dangerous training at the Spire, the tallest, most forbidding tower, deep at the heart of the City.

As she grows in knowledge and power, she starts to uncover the depths of Spire secrets. Kirit begins to doubt her world and its unassailable Laws, setting in motion a chain of events that will lead to a haunting choice, and may well change the city forever—if it isn't destroyed outright.

“The world of the towers grown from bone, where residents strap on wings and soar the air currents, is captivating. As a coming-of-age story, Kirit’s journey to find her place is satisfying, but the real draw is a world that readers will be anxious to revisit in
future volumes of this exciting new series” —Library Journal, « Starred Review « and Debut of the Month

“A lovingly, carefully crafted world—an engineering marvel—filled with captivating characters whose struggles and triumphs will thrill the reader and linger long in the imagination. I want to live in the world Wilde has created!”
— Ken Liu, author of The Grace of Kings.

About a Vampire (Argeneau #22) by Lynsay Sands
The Aeronaut's Windlass (The Cinder Spires, #1) by Jim Butcher
The Bloodforged (Bloodbound #2) by Erin Lindsey
Bound by Sin (Immortal Brothers #3) by Jacquelyn Frank
Brazen (Gilded #3) by Christina Farley
Fated (Servants of Fate #3) by Sarah Fine
Firestorm (The Elemental Series #3) by Shannon Mayer
Ghost for Sale by Sandra Cox
Menagerie (Menagerie #1) by Rachel Vincent
Return Once More (The Historians #1) by Trisha Leigh
Six of Crows (Six of Crows #1) by Leigh Bardugo