UFI welcomes Author Marita A. Hansen. Thanks for Joining us!!


Hello, my name is Marita A. Hansen. I write a number of genres, PNR and fantasy amongst them, as seen in my latest book STELLA MARIS (The Legendary Rosaries). Today, I’d like to talk about the different types of Merges (angels and demons) in this book.

There are five kinds of Merges in Stella Maris, each of them having the power to use the legendary rosaries.

Maris (plural: Marises) – Through the blue rosary (known as the water beads or the Maris rosary), Marises are able to manipulate all forms of water. They are named after the sea and tend to live near it, as well as rivers, lakes, or the snow. With the aid of their rosaries, they can create ice spears, manipulate the weather, forge water attacks, as well as control creatures who inhabit water. Maris angels and demons only have blue eyes, while Maris demons are often called sirens due to their habit of luring the opposite sex to their deaths.

Seraph (Seraphim) – The Seraphim are fire angels. Their rosary (which mainly consists of red jewels) gives them control over different forms of fire, including smoke. They also have the ability to astral project, but only when wearing a Halo rosary, which belongs to air Merges. The angel Seraphim are more in danger of being corrupted due to their fiery temperaments and passionate personalities. They have brown eyes that can turn black or red. Young Seraphim find it hard to control their fire powers and can often light up when overly upset or unwell.

Halo (Halos) – Halos are largely air Merges, but can also heal as well as have control over light. They can astral project at will and have the ability to fly. Their rosaries are named after the halo effect that is created when a non-Halo Merge wears the beads. However, the beads don’t light up when a Halo Merge wears them due to Halos absorbing the light. They are white haired Merges who have very pale eyes.

Halos and their rosaries can also bring people back from the dead. Because of this, Halo angels often live in remote areas, hiding from demons, who seek their rosaries. Halo demons are known as harpies.

Terra (Terras) – Terras have control over earthly elements. Although Halos have some ability to alter their appearance, Terra Merges are the only true shapeshifters. Once they have reached their full potential, they can shapeshift into anything, only their eye colour staying the same (violet or green). Terra demons are the most mischievous, often shapeshifting into mythological creatures to confuse humans. In a chapter from Stella Maris, Reprebus tells his grandson that vampires are ugly bloated creatures who look nothing like Hollywood’s creations, and that it was the Terra demons who created the myth of beautiful vampires, largely due to their penchant for blood.

The Terra rosaries are called the Harvest beads or the wine rosary, the latter due to their purple and green gems.

Stella (Stellas) – Stella means star, which is apt, since these Merges are the stars of their kind. Not because they’re famous, but in the sense that they have the ability to control all of the rosaries, therefore controlling all of the elements. They are the only Merges who can travel between Heaven and Earth without having to die. They are also the only Merges who can’t be demons, although they can become vengeful angels, often striking down demons and corrupted humans. This is why they are nicknamed God’s assassins.

I hope you have enjoyed reading about the different kinds of angels and demons from STELLA MARIS. This book is the first in a series with its sequel coming out in 2018. TERRA (The Legendary Rosaries #2) will be about the shapeshifting angels.

SOME FACTS ABOUT THE AUTHOR:

NATIONALITY: I am a New Zealander with Croatian heritage.
SPORTS: As a teenager my favourite sports were karate, badmington, and running. I also did unarmed combat and played in a touch rugby team (my gym teacher made me do the last one!) Now, I stick to coaching soccer and running. I have completed two marathons, numerous half-marathons and one 30K run.
CAREER PATH: I started off as a Graphic Designer, then went to Auckland University, where I got a BA degree in Art History and Italian Studies and a post-graduate Honours degree in Art History. I worked in the Art History field, then became a full-time artist, doing commissions. I eventually lost all of my senses and gave it up to be a writer :)
BAD HABITS: I'm a major procrastinator, I stay up way too late writing, and I get distracted easily unless it's doing something I love.
STATUS: Married to my high school sweetheart (which he hates me calling him). We have two kids. 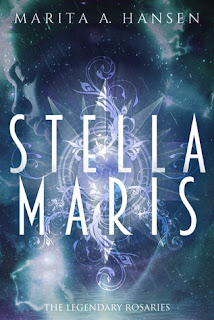 
At her first Confirmation lesson, Catherine Lovich is given a beautiful rosary known as the Stella Maris. Unaware of the danger attached to it, she accepts the gift, soon discovering that each bead on the rosary holds a unique power, powers that only Merges can use. Descended from angels and demons, Merges have the innate ability to manipulate the elements as well as bring the past to the present through dreams.

After meeting Christopher Laboure on her first day back at Agnaru High, Catherine learns that the arrogant but heavenly-looking boy is a Merge—like herself. But unlike Catherine, Christopher is a Seraph, a Merge who controls the fire beads.

When a heated kiss goes wrong, Christopher finds out that Catherine is wearing the Stella Maris—the water rosary his grandfather wants to destroy.

Along with its owner.

STELLA MARIS will transport you into a realm where nothing is what it seems and everything holds hidden danger.

Her eyes widened. She quickly backed up into the locker, fear colouring her expression. I knew why. The fire inside of me had lit up my eyes, turning them from brown to red. I clenched my hands into fists, willing them to change back, the flames already trying to burst forth. But it wouldn’t stop, my panic and hers now fuelling the fire. ~Chris.