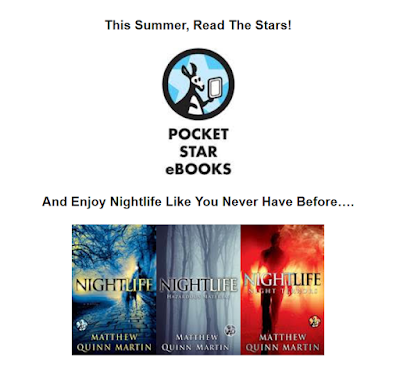 “Thrilling, edgy, and scary as hell, Nightlife is an outstanding debut and––along with Justin Cronin’s The Passage and Charlaine Harris’s Sookie Stackhouse novels––it's also one of the most original takes on the vampire novel I’ve ever read.”
—Jason Starr, Bestselling Author of The Pack
Matthew Quinn Martin first terrified horror fans with NIGHTLIFE (Pocket Star EBooks; October 2013; $5.99), the captivating story of two unlikely monster hunters determined to save the city of New Harbor from the Night Angels—bloodthirsty creatures that feed on the forgotten. Jack Jackson and Beth Becker are among the few who can see these creatures for what they really are, but as they hunt the creatures, a mysterious organization known only as The Division is hunting them.

In the novella NIGHTLIFE: HAZARDOUS MATERIAL (Pocket Star EBooks; May 11, 2015; $.99), we get a glimpse of The Division’s origins and aims, when a young man stumbles onto a long-abandoned video arcade—which three decades ago was the site of the largest mass shooting in New York history—and unwittingly uncovers a relic of unimaginable power and mind-altering terror.

And in NIGHTLIFE: NIGHT TERRORS (Pocket Star EBooks; July 27, 2015; $1.99) readers will discover the never-before-released As the Worm Turns, where Jack and Beth are back, along with their faithful dog, Blood. For months they’ve been keeping just one step ahead of The Division, whose enigmatic leader has been pursuing them with the single-minded obsession to capture them by any means necessary. But as Jack and Beth continue their quest to rid the world of the creatures once and for all they find themselves facing off against something even more terrifying than the Night Angels––something that could hold the key to humanity’s salvation…or its doom.  NIGHTLIFE: NIGHT TERRORS is three amazing horror stories in one chilling bundle...the only thing you won't fear is the price!

Matthew Quinn Martin was born in Allentown, Pennsylvania and raised in New Haven, Connecticut, it wasn’t until Matthew moved to Manhattan that he realized he was a writer. These days, he lives on a small island off the North Atlantic coast of the United States where it gets quiet in the winter…perhaps too quiet…
www.matthewquinnmartin.com
https://twitter.com/matthewqmartin