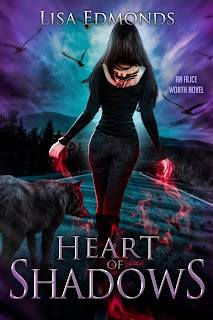 Heart of Shadows
Alice Worth #5
Add HOS on Goodreads


Mage private investigator Alice Worth must solve the most difficult case of her career: her own.

A magic-induced bloodbath during a Vampire Court gala leaves Alice and her boyfriend, alpha werewolf Sean Maclin, wounded. Alice and her ghost sidekick Malcolm reluctantly agree to investigate the deadly supernatural attack. When they vanish without a trace, Sean, his pack, and the Court form an uneasy alliance to locate them. Days later, Sean finds Alice on the side of the road far from home, with no memory and no magic—and no sign of Malcolm.

For Sean, Alice’s condition means starting over with the woman he loves. For Alice, it’s a chance to escape painful memories of her violent past, but she knows she needs her power back before her enemies learn she’s vulnerable. To find Malcolm and her stolen magic, she and Sean team up with his pack, a white witch, the Court, and a pair of dangerous black witches. Their investigation unearths an ancient vendetta and a shadowy enemy so powerful and ruthless, no one involved—most of all Alice—will ever be the same.

Claim a free preview of of book 1 Heart of Malice
https://www.prolificworks.com/discover/author/22335/lisa_edmonds

Keep walking.
The highway stretched out in front of me in a seemingly endless track of asphalt lined with fence and trees. In the distance, the tall, dark shadows of mountains loomed on the horizon. The sun blazed overhead in a cloudless sky and the road shimmered in the heat.
My chest felt hollow, as if something had been ripped out by the roots, leaving an aching emptiness. My heartbeat echoed inside my ribcage like reverberations in a deep, dry well. I was incomplete, fractured, broken. I didn’t know how I’d come to be this way or what was missing—only that I’d once been whole but now was not.
A handful of cars and trucks had passed me in the last hour or so. Other than those few signs of life, I might have been the only person in ten square miles. I hadn’t seen any houses, gas stations, or other buildings since I started walking. The only sounds were wind in the grass, the far-off lowing of cattle, and my boots on the pavement.
My legs grew tired again and my feet hurt with every step. I wiped my forehead with the back of my hand. My pace slowed.
Keep walking and don’t look back.
The command drifted through my head. The voice was familiar, though I couldn’t attach a face or a name to it.
I realized I was walking quickly again. My feet hurt as if my boots were full of razors. My socks squished wetly with every step. I wasn’t sure why since I hadn’t walked through any high water…at least, not that I could remember. The fact I was completely dry otherwise supported that assumption, so my wet socks were a mystery.
As was the small object clutched in my left hand. I vaguely recalled grabbing it and hiding it from someone, but I wasn’t sure when or why. Still, I couldn’t bring myself to drop it beside the road. My hand wouldn’t open and let it go. My fingers cramped from holding it so tightly.
I walked on.
Hours passed. The sun crossed overhead and descended, slipping behind the horizon to my left and plunging the distant mountain peaks in front of me into darkness. The moon was bright enough in the clear sky for me to easily see the road. The pain in my feet was white-hot now, but I couldn’t stop. I dragged myself on, putting one foot in front of the other, with that strange voice replaying endlessly in my ears.
Keep walking and don’t look back.

My Favorite Urban Fantasy Books of 2019


What a wild ride 2019 has been for book lovers! The best in the urban fantasy genre released thrilling new titles, and a host of debut authors introduced fresh worlds, powerful and resourceful heroines and heroes, spine-chilling villains, and innovative magic for us to enjoy and share with other fans of the genre. Trying to stay caught up on the latest and best urban fantasy has to offer is a full-time job in itself. Thankfully, we have fantastic and dedicated reviewers like Urban Fantasy Investigations to keep us informed about can’t-miss titles.


I don’t have as much time to read for fun these days as I used to—an unfortunate side effect of having a full-time day job as an English professor in addition to writing my Alice Worth series. However, some things you make time for, like reading good books. Like most fans of the genre, I look for a compelling and original world, an interesting magic system, dynamic characters who are real enough to live in my imagination, snappy dialogue, fast pacing, and a good mix of drama and humor. Oh, and of course a fun romance with chemistry that crackles off the page!


In celebration of a fantastic year for urban fantasy, I put together a list of some of my favorite UF books of the year. No spoilers—just quick reviews of books that captured my imagination and made me want to 1-Click Buy the rest of that series (or in some cases, everything else that writer releases). Some authors are rising stars, some are established favorites, and some are debut authors to keep an eye on.


SHATTERED BONDS by Faith Hunter (Jane Yellowrock series, Book 13)
Easily one of my all-time favorite urban fantasy series for a litany of reasons: a compelling and dynamic heroine; realistic romantic subplots; wonderful representation of Cherokee culture, language, and inherited trauma; villains as fascinating as Jane herself; and intricate plots ranging from the personal to the global. Jane’s journey has been a hell of a ride. Shattered Bonds builds on the shakeups and losses of the previous novel and pushes Jane and her friends into a new chapter in their lives—one filled with unprecedented danger and personal evolution. As this series draws to a close, it promises to end just as strong as it began, and that’s not an easy feat to accomplish.


ARCHANGEL’S WAR by Nalini Singh (Guild Hunter series, Book 12)
I’ve read pretty much everything by Ms. Singh, and I have to say this series is my favorite. In my opinion, it represents Ms. Singh’s most innovative world-building, as well as some of her most fascinating characters and storylines. ARCHANGEL’S WAR picks up right where the previous novel, ARCHANGEL’S PROPHECY, left off: with the world on the edge of an apocalypse because of an insane archangel and her allies and our heroes Elena and Raphael struggling to survive the changes caused by shifting cosmic power. I love so much about this series, but if I had to point to one thing it would be the richness of the characters—not just Elena and Raphael, but the supporting cast as well. While the series focuses mainly on Elena and Raphael, other characters get great storylines and even entire books focused on their evolutions and romances. Like Ilona Andrews’s Kate Daniels series, this one will be extremely difficult to say goodbye to, largely because its characters are so alive. What a marvelous world Ms. Singh created in these books, and I would welcome spin-offs set in the same world.


TIDES OF TIME by Luna Joya (The Legacy series, Book 1)
Chaos reigns in witch Cami’s family. She longs for a “normal” life, or as near to one as she can have with her powerful lineage, but her troubled past—not to mention her powerful sisters and mother—drag her back into the unpredictable world of magic and the Craft every time. In this first book in what promises to be a must-read series, Cami agrees to help one of her sisters investigate the death of a 1930s star and fights her attraction to tattooed restaurant owner Sam Corraza, who wants to help her solve the mystery. They can help heal each other’s wounds, if this case doesn’t get them both killed. I was hooked on the first page and couldn’t stop reading until the last line. Sometimes that sentiment is an exaggeration, but not this time. I can’t wait for Book 2!


ISHTAR’S LEGACY by Rachel Sullivan (Wild Women series, Book 3)
The Wild Women trilogy was a revelation for me. The series tagline (“Well-behaved women seldom make history, but they still end up as the monsters of folklore”) made me want to read Book 1 (Freyja’s Daughter), and the first chapter of that book made me sure I wanted to read every book in the series. Faline Frey is a huldra and a bounty hunter, one of many powerful women whose origins and abilities are feared and carefully controlled by Hunters—soldiers tasked with keeping women like Faline in check. When her sister goes missing, Faline fights to unite different groups of Wild Women against their common enemy and save not only her sister, but all the Wild Women. The most powerful, alluring, and dangerous women of folklore come to life from the pages of myth and legend in this fantastic trilogy.


STORM CURSED (Mercy Thompson series, Book 11)
Any list of my favorite urban fantasy books of the year inevitably includes a book by Patricia Briggs, who continues to write at the top of her game in both the Mercy Thompson and Alpha & Omega series. Ms. Briggs has created a world for her characters that is both ours and not ours, full of real daily human challenges and fantastical (in all senses of the word) wonders and threats. In this latest installment, coyote shapeshifter Mercy and her mate (alpha werewolf Adam) fight to protect their pack’s territory from all manner of threats, from zombie farm animals to a variety of witches and the ever-present threat of the Fae. Why are these books so damn good? Because the characters are always three-dimensional, the stories are both personal and far-reaching in their implications, the dialogue is witty, and the pacing keeps readers on the edges of their seats.


I would love to review ALL of the amazing urban fantasy books I read this year, but I don’t want to overstay my welcome. Many thanks to Stacy for letting me share my thoughts on these books. If you’re looking for more awesome UF books, here are others from my “best of the year” list:
THE UNKINDEST TIDE by Seanan McGuire (October Daye series, Book 13)
BRAVE THE TEMPEST by Karen Chance (Cassie Palmer series, Book 9)
WICKED HOUR by Chloe Neill (Heirs of Chicagoland series, Book 2)
WICKED BITE by Jeaniene Frost (Night Rebel series, Book 2)
PEACE, BLOOD, AND UNDERSTANDING by Molly Harper (Half-Moon Hollow series, Book 7)
SHARPEST STING by Jennifer Estep (Elemental Assassin series, Book 18)
SAPPHIRE FLAMES by Ilona Andrews (Hidden Legacy series, Book 4)
HOW TO KISS AN UNDEAD BRIDE: THE EPILOGUES by Hayley Edwards (Beginner’s Guide to Necromancy series, Book 7)
__________________________________

Lisa Edmonds was born and raised in Kansas. A graduate of Buhler High School, she studied English and forensic criminology at Wichita State University. After acquiring her Bachelor’s degree, she considered a career in law enforcement as a behavioral analyst before earning a Master's from Wichita State and then a Ph.D. in English from Texas A&M University.

She is currently an associate professor of English at a college in Texas, where she teaches a variety of writing and literature courses.

When not in the classroom, she shares a quiet country home with her husband Bill D’Amico and their cats, and enjoys writing, reading, traveling, spoiling her nephew, and singing karaoke.

Join Lisa's reader community on her website and get a free novella!!