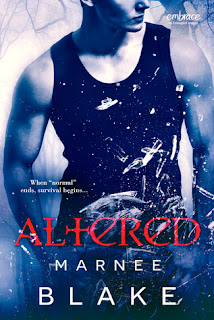 The sickness came on suddenly and violently. When it was done, waitress Blue Michaels was different in a really strange way. And the entire town of Glory was dead...except for her.

Only that's not exactly true. A handful of people made it, including U.S. Army Specialist Seth Campbell, who was caught in the wrong town at the worst time. He's fierce and protective, and way too good-looking. As much as they need a leader—as much as Blue wants to trust him—there are too many questions and not enough time for answers. Now they are hunted. But what their pursuers don't know is each of them has strange new powers. And they'll use their "gifts" to survive...no matter who stands in their way.


Blue becomes violently ill and wakes up to find that her whole town was sick too and only a handful of people made it out of the sickness alive. She quickly finds out that everyone that made it has a new special ability and that there is someone hunting them down.

ALTERED was very fast paced and hand plenty of action from the first chapter to the end. Blake throws you right into the thick of things so be ready to hit the pages running. The characters all had distinct personalities and brought a little something—whether good or bad—to the story. The romance between Blue and Seth was sweet, but I really wanted more. They have a quick attraction and their relationship does develop nicely, but I felt like it was more in the background with the conflict of the book taking the forefront of the story.

There was a small thing that bothered me about ALTERED. I constantly forgot how old the characters were. You can look at the cover or feel their age after an informed grown up decision is made, but then there were times that they felt like a bunch of kids running from their enemies.

After the abrupt ending and the loose ends that it left I am convinced that there has to be another book coming. ALTERED was definitely interesting enough to me that I would be interested in reading more.