Top Five Paranormal Romance Series
While I’m a paranormal romance addict, the series I read also have to pass the feminist reader test. Are there complex female characters? Is there consent and lack of abusive behavior? Thankfully, a lot of modern books are really getting away from the old issues the genre was mired in, so there’s more selection for the savvy reader. Here are some of my top five series in the genre, even though there’s a whole plethora out there to choose from.
Black Dagger Brotherhood
This is one of those growly alpha male series that I plunged into and wasn’t super thrilled with the first book. However, the writing is SHARP, the story was interesting, and I liked it enough to read the following books. By book two, I was smitten, and book three, Zsadist’s book, is one of my absolute favorites. JR Ward has the sort of urban style I’m completely jealous of, as it leaps off the page to drag you into the world of the broken Black Dagger Brotherhood. Each character was meticulously defined and their backstories and histories made them engaging.
Psy-Changeling Series
Nalini Singh is a master of characterization and sensuality. Similarly to reading Black Dagger Brotherhood, the first book didn’t grip me as much, but the third was what had me committed to the series for good. She spins such an engaging tale, and we get so deep into the character’s perspectives. Nalini Singh isn’t afraid of diversity, of variation in gender roles, and it’s such a relief and joy to see. On top of the unique concept with the Psy, her Changelings are one of my favorite examples of shifters.
The Southern Vampire Mysteries
Despite Sookie Stackhouse coming off like the ‘everygirl’ in the beginning of the series, she has this stubborn practicality I adored. And when dealing with multiple varieties of supernaturals, that sort of pragmatism is something to be admired. The books are short, but they take you for an entertaining ride, and at the time it came out, the series provided a refreshing take from all the urban-centric supernatural stories, providing a real Southern flair.
Kate Daniels Series
Ilona Andrews tends to top the charts for me every time. Not only does this urban fantasy series contain one of the best slow-burn romances I’ve ever read, but also the best female lead. Kate Daniels is a queen in urban fantasy, the sort of take-charge, smart-mouthed merc we can all fall in love with. And the version of Atlanta in this series is both terrifying and entertaining, providing a wonderful landscape as the story delves deeper into Kate’s history.
Hidden Legacy
More Ilona Andrews on the docket? You betcha. This series finishes this year, and already, the first two books take you on one hell of a ride. Nevada Baylor and Mad Rogan have the sort of chemistry that makes you giddy. Nevada continues with their brand of competent heroine, though I really loved the family loyalty she espouses and the big sister attitude. Mad Rogan is layered and complex, a soldier who’s never left the war. And with the interesting system of Primes and magic created in this universe, the story is always entertaining.
__________________________________

A modern day Renaissance-woman, Katherine McIntyre has learned soapmaking, beer brewing, tea blending, and most recently roasting coffee. Most of which make sure she’s hydrated and bathed while she spends the rest of her time writing. With a desire to travel and more imagination than she knows what to do with, all the stories jumping around in her head led to the logical route of jotting them down on paper. She writes novels with snarky women, ragtag crews, and guys with bad attitudes. High chances for a passionate speech thrown into the mix. 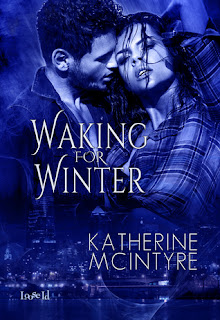 
The Philadelphia Coven has thwarted the Order of the Serpent’s every attempt to destroy their city only to draw out the scariest nightmare from the Otherworld, the Caoranach. One of the Coven’s own, Cami Akiyama, has already met this creature—the very monster who tortured her, branding her with a mark. Given Cami’s history with the big bad, the Coven leader assigns her a bodyguard, none other than the gorgeous and lethal necromancer, Dante Martinez, the ex-boyfriend she disappeared on years ago. One conversation confirms the spark between them never died, and based on the way Dante flirts, he won’t allow that flame to extinguish out without a fight.

No one has ever compared to Dante and the incendiary passion he inspired in her, but the Caoranach broke her—Cami’s too damaged for any sort of relationship. Not like that stops him. If anything, he fights harder for the memories of a love that kept her sane on the bleakest nights. And despite every effort to distance, she finds herself falling for him all over again. Except the Caoranach isn’t finished with her—the branded mark holds the secret to the city’s destruction or salvation, and Cami stands in the center of the storm.