The Winner chosen by Rafflecopter is.....
Read more »
Posted by StacyUFI at 9:15 AM No comments: 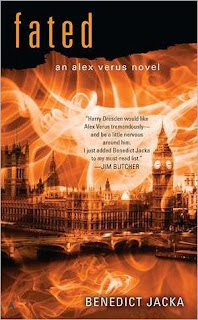 FATED started off a bit slow but ended up picking up speed a little less then halfway through. The idea of the world that Alex lives in was interesting but there wasn't a lot of back story in regards to it. There is a lot of action and mystery. The constant hiding and evading kept me on my toes while reading. I liked the characters they were well written and easy to remember. Alex's gift was pretty neat, he can foresee the future and it helps him in many ways throughout the story with keeping ahead of the people chasing him and Luna as well as adds some suspense to the story.  Luna was my favorite character. I couldn't imagine not being able to get close to someone without pretty much causing their death, she ends up being a pretty strong woman for all that she has been through and is incredibly level headed with all the information she is given. There isn't any romance in FATED but Alex and Luna defiantly have the potential for something great in the future.

I have not read the Dresden files but I have seen many reviews compare the two saying they are similar.. I might end up reading book 2 CURSED but it wont be a must read for me.

Happy Reading!!!
Posted by StacyUFI at 2:59 AM No comments: