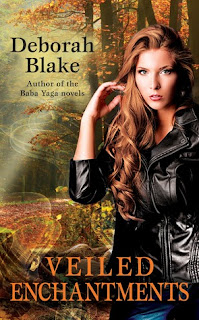 In this exciting novel in the Veiled Magic series, Witch and police officer Donata Santori travels to Maine to help solve a deadly mystery, where her magical abilities are tested like never before.

Still reeling from her unwitting involvement in murder and subsequent break up with a half-Dragon art forger, Witch-cop Donata Santori is grateful for the distraction when her ex-lover requests her help. Not only are Magnus's beloved dead suddenly haunting the Ulfhednar shapechangers in his tiny rural hometown in Maine, their patron god Odin has turned his back on them, and the members of their once tight-knit enclave are at each other's throats. Literally.

Magnus is relying on Donata's experience in dealing with the gods, along with her magical ability to summon the dead, to help him unravel this mystery in time to save his clan. Donata only hopes to survive the ordeal so she can return home to the city and her quiet job at the precinct.

But first, she must discover who or what is behind the terrible attacks on the Ulfhednar. And the clock is ticking, in more ways than one...


Magnus shows up on Donata's door asking for help and although she is apprehensive she accompanies him to Maine.

I honestly don't have a whole lot of feedback when it comes to VEILED ENCHANTMENTS. I enjoyed it thoroughly, but most of what I have to say would spoil things for someone and nobody wants that. I thought Donata was appropriately apprehensive when it came to Magnus after everything she has already been through. I felt the storyline really highlighted the mysteries while also focusing on what Donata wanted in a relationship. There was a good balance.

We meet a lot of new characters in VEILED ENCHANTMENT and most take a while to really grow on you, but I really enjoyed Magnus' mother. She was so warm and loving in moments where everyone else was anything but to Donata.

I really want more Donata! I hope that this series isn't over, but if it is, it ended well.