UFI welcomes Author Rayanne Haines. Thanks for Joining us!!

I’m the biggest sucker for my pet English bulldog – named Bella Luna. In fact she is even the inspiration for a character in my next book! She is seven and a half. I can’t imagine having a “normal” dog after having her.

I don’t want to be one of those people that says, I don’t have any downtime, but well, it’s harder and harder to come by. Winters in my part of the world (Alberta, Canada) are cold and long. I really enjoy a glass of rum in front of a warm fireplace after an afternoon of snowshoeing. And that happens, like maybe twice a year. But when it does, oh it’s good.
In the summer, I kayak. I make it a priority to get on the river at least once a week. Me and water go hand in hand. Even my bulldog likes it. And she has her own lifejacket!

When you get in that zone and your characters write the scene for you! It get been terribly frustrating if they change your carefully constructed plot plan, but really that’s part of the magic, isn’t it?

Yes! I must have quiet. An empty house or office. Writing in a café is not for me. and my playlist. Music is vital to setting the mood and I create a playlist for each of my books while defining the plot. Of course, I add to the list often. I also make sure to do some form of physical activity every morning before I begin writing. It helps focus and calm my mind. I find I work out a lot of plot holes while I’m running.

I like Charlaine Harris. I like Patricia Briggs and J.R. Ward. I like Shelley Laurenston. I’m drawn as much to Urban Fantasy as I am to Paranormal Romance.   I’m interested in finding new voices as well—I think Annie Nicholas is fun.

How would you pitch FIRE BORN to someone who has not heard of it before?

Fire Born is a paranormal romance novel and is the first in a four-part series, The Guardians. In this book we meet Alex, newbie immortal,  and Collum, King of the Dragons and Guardian of the Immortals.

Independent, tough as nails, and fierce to her core, Alex Taleisin can't quite believe it when she has to fight for her life against something not-quite-human in the YMCA parking lot.That's when her aunt lets her in on the family secret. They're immortal--Elementals to be precise, and Alex is the long-lost daughter of the strongest female warrior of their time.Her guardian (a freaking Dragon!) and the sexiest man Alex has ever seen gives her a choice. Go with him, learn how to control her fire, and find her father's people, or try to survive on her own. It's an easy choice considering she's only twenty-six. And the Elders may already be on her trail thanks to the fight with the nut job in the parking lot kick-starting her dormant DNA.Enter an insane grandfather, a shifter with a hidden agenda, and a witch with a shoe addiction, and suddenly loner Alex is wishing for a quiet house in the hills with the dragon she's falling for. But a fight is coming and Alex knows the only way to find her answers is to trust her powers and become the warrior she was destined to be.

Can you tell us a little bit about the world that FIRE BORN is set in?

Fire Born is set in our contemporary world. Immortals of all kinds live among us without our knowledge. The Guardians are tasked with keeping the balance and keeping humans oblivious to the immortal creatures living all around them. Magic in plain sight. And no ones the wiser.

Do you have a favorite scene in FIRE BORN?

Probably any scene where Alex is putting Collum in his place. I also love the scene where Alex and Collum meet and she decides to trust him. Another favorite is the scene when they land in England. I think it’s steamy and funny and true to how people would react in that situation.

So far, the character Mar (Maria Del Voscova) has flown off the page for me. She really seemed to just appear out of nowhere with a fully fleshed out voice. I love this character. I’ve only written the two books in this series. I’m currently working on book three. I think that Domhall will be the most difficult to continue writing. I’m just scratching the surface of his depth and his story. There is a lot to discover.

She writes Paranormal Romance with Kick-Ass Heroines. She believes in magic and legend and all the things we cannot see. Rayanne prefers her alpha males a little gritty and the women who love them, in charge of their own destiny.

Fire Born is the first book of the Guardian Series published by Soul Mate Publishing. Magic Born is available June 2018. 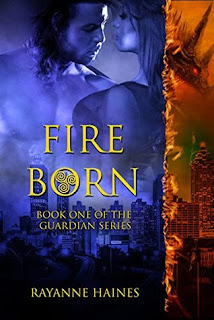 
When Alex Taleisin’s immortal DNA kicks in after a fight for her life against something not-quite-human in the YMCA parking lot, her Aunt finally lets her in on the family secret. They’re Immortal – Elementals to be precise. Only, Alex is a little something more, and until they discover what, her life is in danger.

Collum Thronus, Guardian of the Races and savage King of the Dragons has no choice but to protect Alex and find her father’s people. He made a promise and Collum always keeps his promises. Now, he needs to keep his hands of his charge.

Enter an insane grandfather, a shifter with a hidden agenda, and a witch with a shoe addiction and soon Alex is wishing for a quiet house in the hills with the dragon she’s falling for. But a battle is coming and Alex knows the only way to find her answers is to trust her powers and become the warrior she was destined to be.