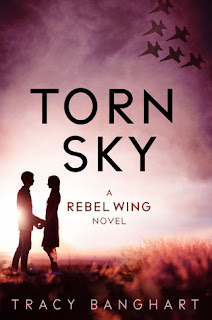 The end is near . . .
When Aris Haan brought down Safara’s biggest war criminal, she’d thought it was a turning point in the war. Victory was on the horizon, as was a peaceful future with her Promised, Milek.
But a deadly new threat has emerged: a Safaran bomb that could wipe out all of Atalanta in one catastrophic blast. Aris is tasked with finding the weapon before it is completed, a mission made more difficult when she starts to suspect that there is a Safaran spy in her unit. Friendships are tested, loyalties are strained, and suddenly Aris no longer knows whom she can trust.
In the epic conclusion to the Rebel Wing series, Atalanta’s fate rests on Aris’s shoulders. Can she find the bomb before it destroys everything—and everyone—she loves?


What an emotional, gut-wrenching ride! TORN SKY is the final book in the Rebel Wing series and really ends the story with a bang. All of Aris's allies are included. Not everyone makes it out at the end, but those that do get their HEA.

Aris has come a long way from the girl we were introduced to in REBEL WING. She is strong, knows what she wants and has no problem going for it, even if it puts her in harms way. Her relationship with Milek has grown and he lets her be who she is without holding her back. I absolutely loved reading about her flying and the joy she got out of protecting those she cares about and the people of Atalanta. I cried my eyes out during a few parts of TORN SKY so be prepared to be emotionally rung out a few times.

One of the silliest things bothered me in TORN SKY. There is a point where Aris puts her ring on her bedside table (because she doesn't wear it while working) and something happens that takes her away from her stationpoint, but she never mentions the ring that was left behind, or how she got it back if it wasn't left behind. Which stuck out because she was really proud of the ring and mentioned it a few times. It just shows up on her hand again in the end of the book. Like I said, silly to bother me, but for some reason it did and I kept waiting and waiting for it to be mentioned.

I would have really loved to see Aris and Milek get married and see a glimpse into their future at the end of the book but overall TORN SKY did a really good job of completing the story. There wasn't an easy resolution to the major conflict of the series which helped make everything seem real and kept my heart pumping. The whole series had a great flow, engaging characters, tons of action and a little bit of romance to make it a well rounded story. I would read it again!