UFI welcomes Author Tricia Skinner. Thanks for Joining us!!

I'm not sure when I became annoyed with certain character types in stories, but let me tell you, annoyed I was. You see, I can read anything as long as I dig the story and can feel something for the characters. When certain traits pop up, my first reaction is to rage against the writing gods, "Why doth thou torture me?"

Melodramatic? Yep, but still annoyed. (wink) Here's what tends to set me off.

Too Stupid To Live

Usually it's the heroine who gets this trait. She's the woman who has a drug cartel on her trail, but she decides to go to her best friend's house for a pizza party. Or she sneaks away from the hero's protection because she left her favorite sweater at her house.

You want to kill her. I want to kill her. She should die for her stupidity. We suffer through her temper tantrums and pouting. She nags the hero ceaselessly, ignores every survival instinct she has, and then she gets in trouble. Please let her die, fellow authors.

I read a book where the heroine's best pal was the kind of guy who'd get stuffed in a locker in school. Stereotypical nerd with a secret crush on the heroine. When she got in trouble (see Too Stupid To Live), this guy turned into Rambo Nerd. He grabbed a weapon and followed the hero to rescue the girl.

Did you roll your eyes? I did. Nothing is wrong with a weaker guy finding courage to help, but there's no damn way he's a weapons expert and can disable bombs with zero training. Did he Google that knowledge on his smartphone?

Another book I read had a villain who wanted the heroine so he could take over her wealthy father's properties. She refused to marry him. What did he do? He sulked like a child. Sulked! His whole storyline was him whining about why she would refuse him and how he'd make her pay. Come on. I need a villain who doesn't need diapers.

In a historical I recently finished, the alpha hero fell in love with a true beauty. She had been through hell, but she gave her love to a man so scared of emotions that the whole story actually worked because it was a struggle to get them together. Imagine my dismay, after almost 600 pages, when one out of the blue rumor about the now-wife of the alpha hero sent that idiot into a jealous tirade. He left her, defenseless and out in the cold, because someone said they thought she had feelings for another guy.

Insert hair pulling now. That is a weak excuse to add one more nugget of conflict. I was exhausted after reading 600 pages only to get kicked in my girly parts with the old "You betrayed me!" action of the alpha. No. Just no.

Tricia Skinner is an author of passionate dark fantasy. She is a features writer for Fresh Fiction and a project manager for Short Fuse. She began her writing career as a business reporter and wrote for The Detroit News, Investor’s Business Daily, MSN, and The Houston Chronicle.

Raised in Detroit, Tricia graduated with a BA degree from the nationally acclaimed Journalism Institute for Media Diversity at Wayne State University. She earned a Masters of Liberal Studies – Creative Writing degree from Southern Methodist University and will obtain a Masters of Fine Arts in Writing Popular Fiction from Seton Hill University in 2017.

Diversity in genre fiction is dear to Tricia’s heart. She is represented by Laurie McLean, co-founder of Fuse Literary Agency.

When not writing, Tricia can be found reading, lifting weights, or geeking out over games, movies, and music. She has a Tom Hiddleston obsession, and she is Team Vader. Her family includes three Great Danes (so far). 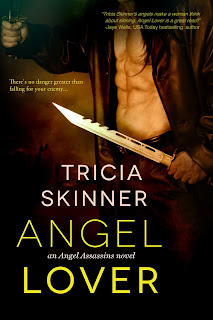 The Nephilim are bound. Their powers cursed. But half-angel Kasdeja will do anything to free them from Heaven's tyranny. When Kas is approached by a striking, mysterious woman, she tells him his greatest enemies hold the key to his freedom.

Mariel keeps herself shrouded in secrets, using them to hide her true self. For she is not just employed by the Renegades--enemy fallen angels—she is a double agent, working on the sly for Heaven. Her directive is to seduce the gorgeous Nephilim—despite her insecurity about such sensual acts.

For Mariel is playing a dangerous game, and falling for Kas could only cause trouble; her assignment isn't just seduction. It's destruction.


“Have you seen the shirt you’re wearing?” she replied, her smoky tone unimpressed.
“This?” Kas dipped his chin and checked his tie-dye. “A classic. Dylan wore one.”
“Then I recommend you return it to him.”

The Nephilim grabbed Mariel's shoulder and squeezed. “You’re coming with me.”


Training instincts kicked in. She slammed her elbow into his abdomen and cracked the back of her fist into his throat. Kasdeja coughed but recovered too quickly. He reached for her again, and she blocked his arm with hers. He switched to his other arm, and she matched the move.


She had once fought demons on the plains of Damascus. She’d hunted dark elves in their underground cities. She’d survived the ambush that had left her team—her friends— dead. No way on earth would a lone Nephilim bring her down.


Desperation fed her, and Mariel pressed her attack, but suppressed her strength. If she could do some damage, she’d make it back to the Renegades while Kasdeja remained alive. She spun a roundhouse kick toward the half angel’s stomach, but he knocked her leg aside. He smoothly dodged her punches but purposely avoided leveling a few of his own.


She grappled for a way to end the fight. This was a mistake, and she wondered why she refused to cause him unnecessary harm. Feigning a jab to the left, she struck his face on the right. His head snapped to the side, his long, loose hair flying. A lucky hit.


Kasdeja swept one of her legs. Twisting, she narrowly missed a face-plant into the pavement and rolled away from his boot before it collided with her side.


The fight had moved them deeper into the parking lot. Half a dozen cars and trucks, parked inside and outside the painted lines, made maneuvering dicey. The Nephilim’s arm came around faster than she expected and slapped her into a spin.


Mariel reached toward the blades hidden in her boots but changed her mind. She stared at him and caught the stormy menace in his eyes. Distracted, she failed to avoid the back of his arm as it drove into her stomach.


The air whooshed from her lungs and Kasdeja pressed in, not giving her time to regain a breath. He locked his large hands over her wrists, lifted her off her feet, and shoved her, suspended by her wrists, against a brick wall. A sunburst exploded behind her eyes. Agony blasted through her body and escaped her mouth in a sharp cry.

“Damn you. I should bury you,” the assassin said in a choppy voice. 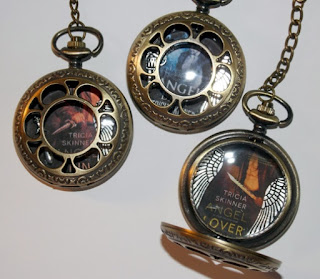