UFI welcomes Author J.C. Nelson. Thanks for Joining us!!


What can you tell my readers about yourself that they might not know from looking on your bio or reading in another interview?
For fifteen years, I worked on email servers, writing code that has transferred millions of messages over the years. To this day, I still speak MIME, as in multipurpose internet mail extensions, not the mimes everyone hates.

What do you enjoy doing on your down time?
I love cooking, video games, and taking my kids to the lake so I can read while they swim.

What is your Favorite part of writing?
Without a doubt, it’s losing myself in a new world and discovering pieces of it I didn’t plan in the beginning. There’s a point at which the world becomes a character in and of itself, and the story goes places you never dreamed or planned. Every time I sit down at a computer, I know there could be something magical waiting for me to discover.

Do you have any certain routines you must follow as you write?
I’m odd in that all I need is a place to put my laptop. Once I start writing, I become so absorbed with with the story it’s near impossible to pull myself out.

What are some of your Favorite books or Authors in the Urban Fantasy/ Paranormal Genres?
Favorite series, pretty much hands down, is the Dresden Files by Jim Butcher, though the Iron Druid books by Kevin Hearne are a close second. I loved Yasmine Galenorn’s Whisper Hollow series, for the atmosphere alone. It’s the sort of oppressive, brooding setting I love to read about. For heist style books, Jamie Shultz’s Arcane Underworld series is one of my favorites. When it comes to ensemble casts, Lauren Roy’s Night Owls books are lots of fun.

How would you pitch THE REBURIALISTS to someone who has not heard of it before?
I pitched it to my agent as “The Mummy Meets Indianna Jones.”  This book is everything I love about action/adventure movies rolled into a story.

Can you tell us a little bit about the world that THE REBURIALISTS is set in?
In the world of The Reburialists, the dead have always risen, or at least, for the last few thousand years, but instead of a zombie apocalypse, humans have adapted so they can get on with the business of killing each other. So society is both very similar to what we know..and different in ways that show at the edges. Morticians and medical examiners are battle hardened veterans, the government gives tax credits for cremating bodies, and at the center of the battle to keep humanity safe is a group of men and women crazy enough to battle the dead.

Do you have a favorite scene in THE REBURIALISTS ?
One my favorites, for certain is when Brynner and Grace first go back to Bentonville - you’ve got a man who is internationally known going back to the small town where he grew up, and the whole situation is so awkward it made me smile the whole time.

Which one character out of all your books was your favorite to write about? What about the hardest to write about?
My favorite character from all the books? It’s hard to say. In the Grimm Agency series, my favorite hands down is Grimm, because he’s so complex. He’s neither good nor evil, and writing his character forced me to look at how a non human would interact with humans.  The hardest to write? Has to be Maggie Bismuth from The Reburialists. She’s an African American from Atlanta, Georgia, head of a national armed force, and knows full well her bureau is the line of protection keeping mankind safe.

What Other Projects can we look forward to reading from you?
I’m currently finishing up a story about a corrupt Texas Ranger and a murderous prostitute who team up to take on Lucifer, in a book I call “West of Hell.
________________________

J.C. Nelson is the author of the Grimm Agency novels, including Wish Bound, Armageddon Rules, and Free Agent, and is also a software developer and ex-beekeeper. 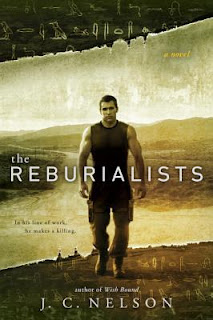 
Burying the dead is easy.  Keeping them down is difficult.

At the Bureau of Special Investigations, agents encounter all sorts of paranormal evils. So for Agent Brynner Carson, driving a stake through a rampaging three-week-old corpse is par for the course. Except this cadaver is different. It’s talking—and it has a message about his father, Heinrich.

The reanimated stiff delivers an ultimatum written in bloody hieroglyphics, and BSI Senior Analyst Grace Roberts is called in to translate. It seems that Heinrich Carson stole the heart of Ra-Ame, the long-dead god of the Re-Animus. She wants it back. The only problem is Heinrich took the secret of its location to his grave.

With the arrival of Ra-Ame looming and her undead army wreaking havoc, Brynner and Grace must race to find the key to stopping her. It’s a race they can’t afford to lose, but then again, it’s just another day on the job . . .

“What begins as a deceptively cutesy urban fantasy soon ups the ante with the gathering darkness and sharp details of the ongoing price of magical servitude. A fireball of a start.”
—Publishers Weekly

“Nelson is no-hit wonder, as this new tale is as dark and wondrously twisted as the first. If you like your fairy tales a bit grim (yes, pun obviously intended), then this is the series for you!”
—RT Book Reviews

“Action-packed…Will have you up till the early morning and laughing out loud till your insides hurt.”
—Short and Sweet Reviews

“Prepare to be entertained!”
—Fresh Fiction