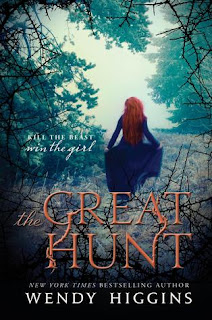 
When a strange beast terrorizes the kingdom of Lochlanach, fear stirs revolt. In an act of desperation, a proclamation is sent to all of Eurona—kill the creature and win the ultimate prize: the daughter of King Lochson’s hand in marriage.

Princess Aerity knows her duty to the kingdom but cannot bear the idea of marrying a stranger…until a brooding local hunter, Paxton Seabolt, catches her attention. There’s no denying the unspoken lure between them…or his mysterious resentment.

Paxton is not the marrying type. Nor does he care much for spoiled royals and their arcane laws. He’s determined to keep his focus on the task at hand—ridding the kingdom of the beast—but the princess continues to surprise him, and the perilous secrets he’s buried begin to surface.

Inspired by the Grimm Brothers’ tale “The Singing Bone,” New York Times bestselling author Wendy Higgins delivers a dark fantasy filled with rugged hunters, romantic tension, and a princess willing to risk all to save her kingdom.


With a nice fast pace and interesting storyline, THE GREAT HUNT was an intriguing fantasy with plenty of action and romance to complement the darker elements throughout.

Things I Liked: I actually really liked Aerity as a characters. She was willing to sacrifice her happiness for her kingdom. That isn't a small thing and I thought that she had a really good grasp on the reality of the situation her family and kingdom were in. Paxton was really moody, but he is loyal to his family and the kingdom he lives in. I can respect that.

A few other likable things. THE GREAT HUNT had a good amount of mystery to it. I love a good mystery. There was a great cast of secondary characters that helped keep things interesting. The world was great and well built.

The Issues: The romance ticked me off more than it made me swoon. Although I liked Paxton, he acted like a true arse to Aerity and did a lot of things to push her away even though he was attracted to her and wanted her. But the worst part was that Aerity actually liked it in some ways. Uggh, what is with that? Not cool.

Another issue. There was a lot of sitting around the castle. Even with the neat action scenes there was an equal amount of 'nothing going on' moments.

Even with the issues, I still enjoyed THE GREAT HUNT and wouldn't mind continuing with the next book to see how things work out for Aerity and Paxton.