UFI welcomes Author David Hofmeyr. Thanks for Joining us!!

I split my life between two cities, London and Paris. It sounds exotic and it can be. But sometimes it makes me feel like an outsider in both places. C’est la vie!

Travel. I’ve been all over the world and love experiencing new cultures and places and cities. I’ve lived in Cape Town, Hong Kong, London, Paris and San Francisco.

Film. I’m a fan. I watch movies all the time. I even watch trailers to get into the mood for writing. The sound and the imagery always offer inspiration for me.

I get to play God. I choose what happens. It’s a responsibility to care for the characters in the right way. To give them depth and also to allow them to tell me what they would say and wouldn’t say. I love the creative process. Starting with a blank page … ending up somehow with a fully realized story world. It’s an incredible process. It’s magic.

No. I’m a little haphazard. I’m not particularly disciplined. I write when the mood fires and I approach the page in different ways each time.

I thought The Hunger Games was terrific. Divergent is great too. Excellent world building. I also loved the Knife of Never Letting Go by Patrick Ness. I was a sucker for The Lord of the Rings when I was a kid and devoured all the Stephen King books.

How would you pitch STONE RIDER to someone who has not heard of it before?

Think the Hunger Games meets Mad Max. An adrenalin-fuelled race across an epic desert. A battle for survival and humanity in a world where hope is all people have.

Can you tell us a little bit about the world that STONE RIDER is set in?

This is a post-apocalyptic future earth. Some unknown cataclysm has blasted the world and left people divided. The uber-wealthy and the privileged leave the planet for an ark in space called Sky-Base and the those left-behind are forced to eke out a brutal existence in a world that seesaws from extreme heat in the summer to freezing winters.

Do you have a favorite scene in STONE RIDER?

I love the scene where the protagonist, and mostly ordinary, Adam meets the extraordinary Kane. I love the ways two characters come together from different worlds and I enjoy imagining how they would meet and what they would say to each other.

My character, Kane is the most interesting to write. He’s an outsider and a rebel. A Christ-figure. Mysterious and dangerous. He’s a huge amount of fun to write. The hardest to write is probably the villain, because the villain has to be the most complex character. A book lives and dies but the nature of the villain. I wanted him to lie at the periphery, like a constant threat, but also bring him in close enough to thrill the reader.

David Hofmeyr is the author of STONE RIDER. He works as a Planner for Ogilvy & Mather. David was born in South Africa and lives in London. 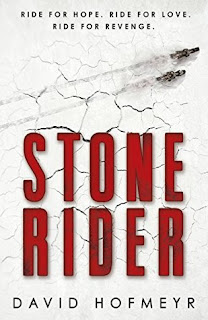 
In the vein of The Outsiders and the early Western novels of Elmore Leonard, this inventive debut novel, a cross between the cult classic Mad Max movie series and Cormac McCarthy’s The Road, blends adrenaline-fueled action with an improbable yet tender romance to offer a rich and vivid portrayal of misfits and loners forced together in their struggle for a better life.

Adam Stone wants freedom and peace. He wants a chance to escape Blackwater, the dust-bowl desert town he grew up in. Most of all, he wants the beautiful Sadie Blood. Alongside Sadie and the dangerous outsider Kane, Adam will ride the Blackwater Trail in a brutal race that will test them all, body and soul. Only the strongest will survive.

The prize? A one-way ticket to Sky-Base and unimaginable luxury.

And for a chance at this new life, Adam will risk everything.