UFI welcomes Barb Hendee Author of Witches in Red. Thanks for Joining us!!

I live in a small town in the Willamette Valley in Oregon with my husband JC and our two young cats, Ashes and Cinders. JC and I grow a good deal of our food six months out of the year. I am a cheerful sort and a neat freak—both of which I’m told are odd traits for a professional writer. I’m addicted to coffee, but I never drink it past noon.

I’m a hermit by nature, but I don’t like being a hermit all by myself . . . hence JC and the cats. I spend my days writing, gardening, or cooking. At night, JC and I tend to watch TV shows like Arrow or Grimm or The Big Bang Theory . . . or we play fantasy board games. I love to cook, and we have a large backyard with a patio, so one of my favorite things to do is to have friends over for soft taco feeds or BBQs, so we can sit out back and eat and enjoy the garden.

I LOVE working from home. Also, I’ve had scenes and people running around inside my head since I was about seven years old, and it is a great relief to put them into stories and get them out of my head.

Yes, but the routines are different if I’m collaborating on a Noble Dead book with JC or if I’m writing an independent novel. JC is a very, very slow writer, and I’m an incredibly fast “binge” writer.

With a Noble Dead book, we create a detailed outline together, and I write the first draft, but I go slow so that he’s not overwhelmed as he comes behind me to revise. We’re both early risers, so we eat breakfast, and then we work until about 1:00 in the afternoon. Then we stop for lunch, and then we take our kitties out back so they can play outside (they cannot go out unsupervised). Then we take care of things like cleaning the house, grocery shopping, banking, gardening, etc in the afternoon.

Okay . . . but when I’m writing an independent novel, such a Vampire Memories novel or a Mist-Torn Witch novel . . . I throw myself into it. I get up early (sometimes by 5:30), make coffee, and start writing. Somehow (and I’m never sure how), I manage to keep everyone fed and alive, but I just binge-write until the book is done. Some days, I can draft fifteen pages. I’ve drafted 400 page novels in six weeks. However, during one of these binges, JC often has to remind me to take a shower or to stretch out my back, and I’ve been told by a number of people in my life, “You change when you’re writing a novel on your own. You’re inside your head the whole time.”

Thankfully, I only publish one independent novel a year, but I really need to immerse myself in order to hit all the right emotional notes for the characters.

I hesitate to admit this, but I spend sooooooo much time writing fantasy that when I get downtime to read, I tend to go for literary mainstream, murder mysteries, or historical fiction. Right now, I’m reading Orphan Train by Christina Baker Kline.

I did enjoy the first five novels in the Sookie Stackhouse series. Those were great fun. I couldn’t watch the TV series though. It was just too much. I tried the first episode, and suddenly, there was a naked Jason Stackhouse having violent, angry sex, and I ran for the off switch.

I love the fantasy novels of Juliet Marillier, especially Daughter of the Forest and Son of Shadows. My favorite fantasy novel of all time is The Mists of Avalon by Marion Zimmer Bradley.

How would you pitch The Mist-Torn Witches Series to someone who has not heard of it before?

It used to be harder to sell cross-genre novels to a New York publisher, but with the explosion of urban fantasy, in recent years, it’s gotten easier. In 2011, I decided to take a risk in this changing market, and I pitched a proposal for a medieval fantasy murder mystery series staring two gypsy girls. My editor bought it.

The first novel, The Mist-Torn Witches, came out in May 2013, and the second book, Witches in Red comes out May 6th of this year.

These stories combine magic, herbology, witchcraft, and romance . . . but the heart of each novel is a murder mystery with supernatural elements that always involve witchcraft.

The main characters are two sisters, Céline and Amelie Fawe, who become indebted to a warlord prince. Céline can touch a person’s hand and then read his or her future. Amelie can read the past. They end up in a situation where they are sometimes called on to use their abilities to solve unexplainable murders.

Can you tell us a little bit about the world that The Mist Torn Witches Series is set in?

It’s set on the same continent as the first six novels of the Noble Dead Saga, in the dark, dripping nation of Droevinka. This country is governed by warlord “princes,” and some are more savage than others. Many of the peasants have a rough time surviving, and as a result, ignorance, fear, and superstition are all more of a rule than an exception.

In this world, Céline and Amelie have managed to find themselves a safe haven, and they are determined to keep it.

Do you have a favorite scene in Witches in Red?

Let’s see . . . yes, one of the male characters is a highly competent, over-protective lieutenant named Jaromir. He always believes he’s the smartest and most capable person in the room.

In Witches in Red, the characters find themselves in an isolated mining camp that is overseen by a large group of soldiers. Several of the men have turned into mad, slathering werewolves, and Céline and Amelie have been engaged to find out why this is happening.

In one scene in the forest at night, Jaromir is attempting to capture one of these beasts so that Céline can study it, and he ends up in trouble. Amelie runs in with a spear. I don’t want spoil anything, but result is interesting (smiles). I had a good time writing that scene.

Céline is my favorite because she embodies so many conflicting traits. She is a young apothecary and herbologist. She is possessed of genuine kindness and concern for others. However, before her true abilities manifested, she made part of her living by pretending to be a “seer” and doing readings and telling people exactly what they needed or wanted to hear. So, she’s also a consummate liar with the heart of a charlatan.

Prince Anton is the most difficult to write for (He’s the warlord prince to whom the sisters are indebted). I just finished writing the third novel, and he’s a major character in that book, and I wanted to do him justice. But he had a tragic childhood, and he’s very emotionally “closed off.” Writing for him proved a little more difficult than I anticipated.

If you like urban vampire novels, you can try my Vampire Memories series (Blood Memories, Hunting Memories, Memories of Envy, etc).

I just turned in book three in the Mist-Torn Witches series, Witches with the Enemy, and that will be released in May 2015.

JC and I have an embarrassingly long-running series called The Noble Dead Saga, which is sort of a cross between high fantasy and dark fantasy. The penultimate novel, First and Last Sorcerer, comes out in January, and then we have only one more book to write for that series to finish it: The Night Voice. A number of people have asked me, “Won’t you be sad to finish the saga?” 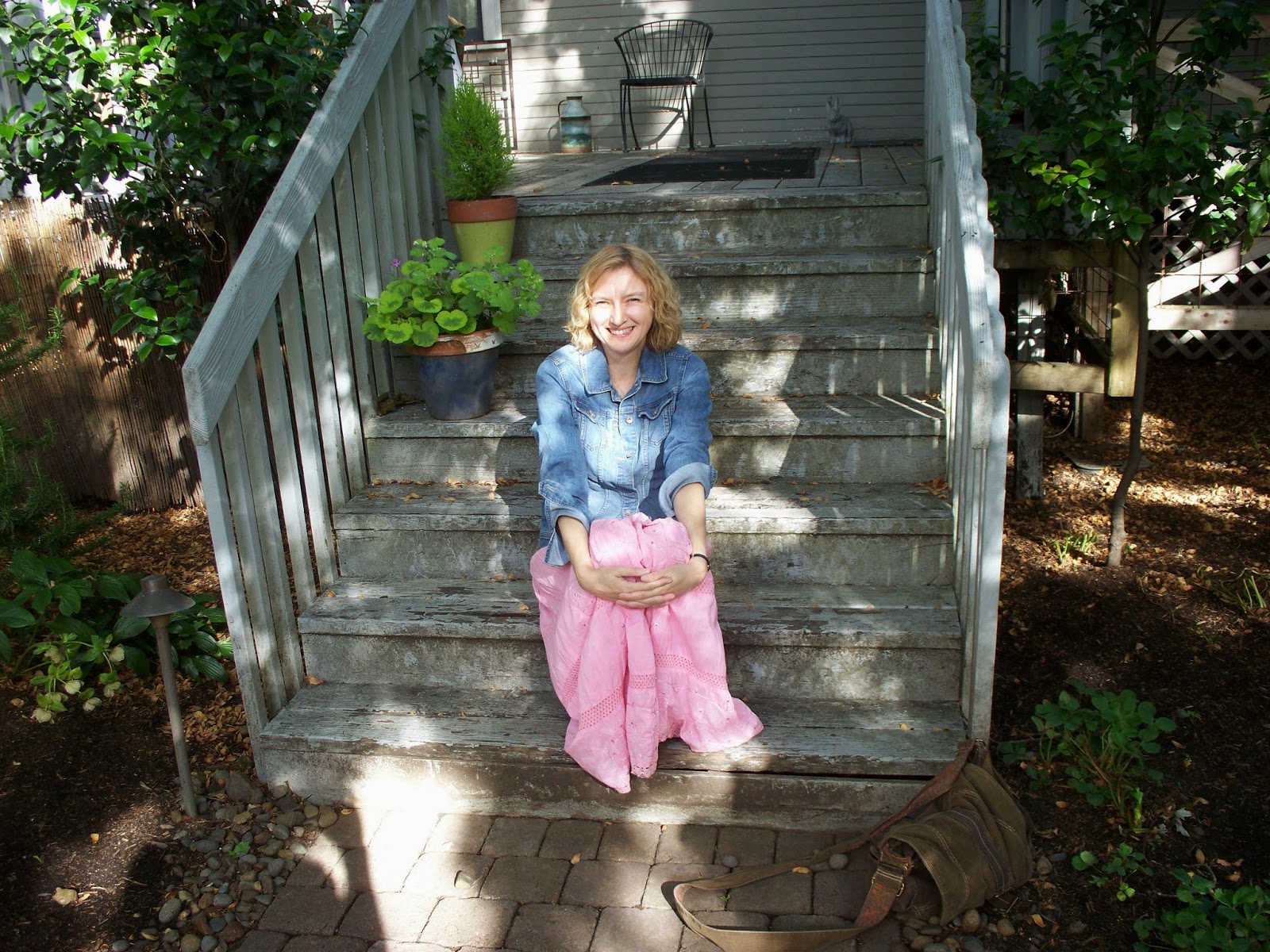 Barb Hendee is the nationally best-selling co-author of the Noble Dead Saga (along with her husband J.C.). She is also the author of the Vampire Memories series and the recently launched Mist-Torn Witches series. She has a master’s degree in English and taught college for twelve years. She was born in the northwest, later migrated to Idaho and then Colorado, but she missed the rain and the moss too much and now lives just south of Portland, Oregon in the Willamette Valley with J.C. and their two young kitties, Ashes and Cinders. 
Céline and Amelie Fawe can see into anyone’s past and future simply by touching them. They have used their powers to secure sanctuary—and a fine apothecary’s shop—in the village around Castle Sèone. But their continued safety has a price…

Far to the north, the men of an isolated silver mining community are turning into vicious “beasts” that slaughter anyone in sight. The mines belong to the noble family of Prince Anton—ruler of Castle Sèone and Céline and Amelie’s patron—and Anton’s tyrannical father has ordered his son to solve the mystery as a test of his leadership. He has no choice but to send the witches into the perilous north, to use their abilities to discover the cause of the transformations. Given how much they owe the prince, the sisters have no choice but to accept.

Together with the over-protective Lieutenant Jaromir, Célene and Amelie enter the dark world of a far off mining camp tainted by fear, mistrust, and enslavement—and haunted by men turning into massive, mad wolves without warning. Now, the two must draw upon strength and cunning they never thought they possessed not only to solve the mystery, but to survive…