UFI welcomes Author Jacey Bedford. Thanks for Joining us!!

I spent a lot of my youth riding horses and reading pony books before discovering fantasy fiction by finding a copy of CS Lewis' The Horse and His Boy. That was my gateway into fantastic literature and I haven't looked back since. I've been a bookaholic all my life so it was natural that I went to college and became a librarian and then progressed to writing my own stories. When we had kids I left libraries, and after a few years I ended up singing with a cappella vocal trio, Artisan (www.artisan-harmony.com), touring internationally. I've made a dozen CDs and a concert DVD and played all over the UK, parts of Europe, the USA, Canada and Australia. Since the band split up, I've worked from home, which I adore.

Down time? What is this 'down time' of which you speak? I run my own business booking music tours of the UK for folk performers and I write, so there's really not much down time at all. I try to cram in reading as well, and then there's all the day-to-day stuff. Sometimes I barely have time to dash off to the supermarket to buy groceries. I'm also the secretary of Milford - that's the Milford SF Writers' Conference in the UK - (www.milfordSF.co.uk) which is a week-long event for published SF authors.

I know some authors don't like the editing process, but I love it. It's the point at which you can take a first draft - sometimes a fairly crappy first draft - a rework it to make sense. You can refine ideas and characterisation and suddenly from this chaotic jumble of words, something emerges that has shape and structure.

Not really. My motto is: apply seat of trousers to office chair, fingers to keyboard and type. My office is at the front of the house. It's a room full of books, my desk, my computer, and it has a bit of spare floor space for the dog to lie down and keep me company. I often hit the office chair before I hit the kitchen in the morning. My other half says I'm impossible to prise out of there once I get absorbed. I write late into the night so I'm rarely awake before ten, but I'm often writing at three in the morning because that's when the rest of the world is asleep and no one wants a piece of me. The phone stops ringing. The household is quiet. I like a quiet writing space. I can't listen to music while I'm writing. I guess it's having been in the music business. Music is to be listened to. If I have it playing while I'm writing I get distracted.

I really love Patricia Briggs' Mercy Thompson books. Ms Briggs is a buy-on-sight author and I think I have everything she's ever written. I'm also exceedingly fond of Kevin Hearne's Iron Druid books and Benedict Jacka's Alex Verus books. I also love Scott Lynch's Gentlemen Bastards books and Lisa Shearin's Raine Benares books. Both of those last ones are second-world fantasies, but they've got the snap of Urban Fantasy. Not Urban Fantasy at all, but I have to mention my favourite author, Lois McMaster Bujold, who writes both science fiction and fantasy. Her character, Miles Vorkosigan, could easily grace the pages of any urban fantasy. I've just started to read C.E, Murphy's Negotiator books, starting with Heart of Stone, featuring Margrit, a young black lawyer in NYC, and Alban, a gargoyle. I'm looking forward to reading more, her characters are great.

How would you pitch your Rowankind series to someone who has not heard of it before?

Urban-ish fantasy set in 1800. Ross Tremayne, a cross-dressing female privateer captain and unregistered witch, likes her life on the high seas surrounded by a bunch of barely reformed pirates and accompanied by the ghost of her dead husband, but when she pays a deathbed visit to her estranged mother she inherits a brother she didn't know she had, and a task she doesn't want. Enter Corwen, wolf shapechanger. He's handsome, competent and Ross really doesn't like him. Neither does Will's ghost. Ross has to choose between the land and the sea; the ghost of the past, or the possibilities of the future, and she has to make a decision which could affect the whole country, for better or for worse.

Can you tell us a little bit about the world that Winterwood, the first in the Rowankind Series, is set in?

It's 1800. England is ruled by Mad King George, the American colonies have been lost and Napoleon is knocking at the door. Out on the oceans British privateers with letters of marque from the king cruise legitimately for prizes of French merchant ships. On land, in almost every household of substance, is an unpaid army of rowankind, gentle bond-servants so unremarkable that everyone has forgotten where they came from in the first place. Magic is strictly controlled by the Mysterium. Registered witches are limited to performing small magics. Unregistered witches are hanged. And somewhere, hidden in the darkest corner of London, is a two hundred year old organisation so secret that it hasn't even got a name.

Do you have a favorite scene in Winterwood?

I have a couple of favourite scenes. I really like the opening in which Ross visits her dying mother. After seven years of estrangement it's a bitter scene. There's no forgiveness on either side, though Ross doesn't come to understand why it's all come about until she learns about her family's past.

Also much later on, Ross and Corwen are taking cautious first steps, but Will's ghost gets into a jealous snit. Corwen and the ghost end up facing off at a most inconvenient moment. That was a really fun scene to write.

I think they're all favourites while you're writing them. Ask me tomorrow and I might have a different answer. I like writing complex, multi-layered characters. In Winterwood Ross came to me fairly easily. She almost jumped on to the page fully-formed. She's the captain of her own ship. She dresses in man's clothes and has taken on the persona of her late husband, Will. She's grown into the role of privateer, preferring the sea to the land because on the land her magic gains strength and threatens to overwhelm her. She's good at what she does, and has remade a family for herself, her own being out of reach. Corwen, on the other hand, is a bit of an enigma. I'm writing the second Rowankind book now and still discovering aspects of Corwen that didn't come out in the first book. In Winterwood, he's a mystery and Ross thinks he's dangerous and doubts his motives. He doesn't get any point-of-view time, so reveals himself through what he does and says, not what he thinks.

Winterwood is the first in a trilogy about the world of the Rowankind. The second book, Silverwolf, will deal with the aftermath of Ross' action in Winterwood. What she does will impact on England, the industrial revolution, the tolerance for magic and even on Mad King George himself. The third book will continue the story with further forays into the political situation complicated by a litter of little shapechangers who can't stay out of trouble. I also write science fiction. My first two space operas in the Psi-Tech universe, are far-future adventures with spaceships, telepathy, evil megacorporations and something dark lurking in the depths of Foldspace. Empire of Dust and Crossways are out now (from DAW) and the third in the trilogy, Nimbus, is the next to be written.
__________________________________ 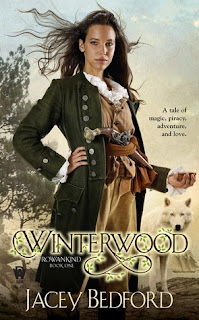 
Set in 1800 in Britain, Mad King George is on the throne with Napoleon Bonaparte knocking on the door. Unregistered magic users are pursued to the death, while in every genteel home resides uncomplaining rowankind bondservants who have become so commonplace that no one can recall where they came from.

Meanwhile, Rossalinde Tremayne is satisfied with her life as a cross-dressing privateer captain on the high seas. But a bitter deathbed visit to her estranged mother changes her life completely when she inherits a magical winterwood box. Now, not only is she confronted with a newly-discovered brother, and an annoyingly handsome wolf shapeshifter, Rossalinde has to decide whether or not to open the box to free rowankind and right an ancient wrong—even if it brings the downfall of Britain.

This brand-new series is perfect for fans of Elizabeth Bear, D.B. Jackson, and Marie Brennan, as well as readers of historical fiction who are looking for an accessible gateway to fantasy.

“Swashbuckling action, folklore and characters to care about: this is an authentic English take on historical fantasy, magic and class.”
—Kari Sperring

“A fabulous and fun action-packed story, with an engaging heroine.”
—Liz Williams 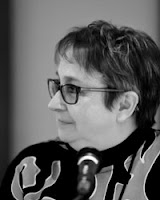 Jacey Bedford is an English writer who is published by DAW in the USA. She lives and works behind a desk in Pennine Yorkshire. She's had stories published on both sides of the Atlantic. Her first two novels, Empire of Dust and Crossways are science fiction (space opera) and follow on from each other in the Psi-Tech series. (There will be a third Psi-Tech book, Nimbus.) Winterwood, a historical fantasy is out in February 2016. Set in 1800, expect a cross-dressing privateer captain, the jealous ghost of her dead husband, and a sexy wolf shapechanger. A sequel, Silverwolf, will follow.

Jacey is secretary of the UK Milford Writers' Conference, a peer-to-peer workshopping week for published SF writers. She also hosts Northwrite SF, a critique group based in Yorkshire.

She's been a librarian, a postmistress and member of internationally touring a cappella trio, Artisan (and still occasionally is for reunion gigs). When not writing she arranges UK gigs for folk artists from all over the world.