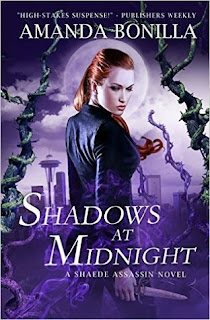 
Has Darian’s past finally caught up with her?

The Rakshasa queen, Padma, has a score to settle—she wants those responsible for her son’s death to pay and to pay dearly. Darian, Tyler and Xander are all at risk—and Padma’s powers could force them to live the rest of their lives in the madness of the Realm of Illusions…

While Darian is taken and is the first to suffer, she’s soon rescued by Tyler, the one man to never disappoint. But what Darian doesn’t know is that her freedom comes at a steep price—Xander’s the King of Shaedes, imprisonment. Darian knows what horrors await in Padma’s dungeon. A rescue mission won’t be easy and she can’t do it alone.

Deep in the bowels of Goblin Valley, Darian, Tyler, and her small band of Shaede warriors fight their way through a dark labyrinth. In a realm where illusions rule, with danger at every turn, the odds are stacked against them. Time isn’t on their side, every second spent in Padma’s custody will be another step Xander takes toward madness. A kingdom can’t be ruled without its king and the wolves are at the door, waiting. If Darian can’t get to Xander before he succumbs to the illusions, an entire kingdom’s future is at stake…

Book four, AGAINST THE DAWN, left Darian kidnapped and on her way to face the consequences of killing Azriel. The first few chapters of SHADOWS OF MIDNIGHT are really dark so be prepared. When Darian is released from the Rakshasa Queen, she jumps right back into danger to save Xander. I really loved that Asher was part of her team. He is one of my favorite secondary characters and I love the connection that they have and the way that they work together. I was a bit sad that my other fave secondary character, Rafe, was left out of the action this round.

If you're a Tyler fan, get ready for a book FILLED with him and information about him. I for one have had so many questions about him and the ring that he gave Darian. Not only do we get answers, we see a different side of him. I have not yet decided if I like that other side, but I sure enjoyed watching everything unfold. Now if you're a Xander fan, you might fall even more in love with him in SHADOWS AT MIDNIGHT. He makes a huge sacrifice to save Darian and I for one felt the love he has for her shining through every decision he made in book five. In past books I could never really tell if his feelings were real or if he was just chasing her because she didn't give into him like others would have. I have no doubts now that he is truly in love with her.

The ending of SHADOWS AT MIDNIGHT really throws out a curve ball and left me with a LOT of questions. Get ready for a cliff hanger that leaves you with a deep need to get your hands on the next book and maybe make you want to shake the author a little to find out what the heck is going on.