UFI welcomes Author Sara E. Tall. Thanks for Joining us!!

I debated starting on this note, and then I decided to go for it.  I’m a Bisexual Latter-Day Saint/Mormon. My writing energies that don’t go to fiction go to blogging about my faith and sexuality.  Despite all the craziness , being a BiChristian is an absolute blast, and I wouldn’t change it for the world.

Dancing!  Actually, I enjoy doing that all the time, whether it’s down time or not.  Not that I’m a good dancer, but that doesn’t stop me from dancing all over the place at the most random of times.  I also enjoy hiking, canoeing, swimming, and the other cool outdoors-y things I can do that don’t break my bank.  Also card games.  I am a very—passionate— person, when it comes to cards.

Hands down, it’s the characters. I’ve discovered that I really love people, and writing for me is a just a chance to explore and try to understand these interesting and often times crazy people, in a way that doesn’t involve getting a doctorate in Psychology.   I love watching the way they grow and develop into something more than I ever could have imagined.  If I had one wish I would wish that my characters were real people.  Well, maybe not all of them, unless I had a freeze ray…

While I do try to follow routines, I’m usually just trying to squeeze writing time in any time or place I can, which has led to some pretty unconventional situations.  Those lead to some of the best inspiration though.  I’ve got plenty of procrastination rituals, though.

Cassandra Clare, Rick Riordan, and Jim Butcher are the three that come to mind at first.  I’ve read a gazillion others though.

How would you pitch ALPHA: MISFIT’S RISE to someone who has not heard of it before?

I’ve had a lot of practice at this lately.  Billie, a half-breed outcast to the magical Realm, is given a chance to return home after almost blowing up a human house.  Her dream quickly turns into a nightmare when she learns the Realm’s seven magical species are on the brink of a civil war and staying means she would be caught in the middle of it.  Staying is her only chance of becoming a true mage, but it comes with a high price. Up to and possibly including her life.

Can you tell us a little bit about the world that ALPHA: MISFIT’S RISE is set in?

I was inspired a lot by mythology for Alpha, and one concept I’ve always enjoyed was Hades’ underworld.  Only in this case, the underworld isn’t heaven, hell, or even an afterlife.  It’s a magical world connected to our own that became a safe haven for the Magi of Earth, a place where they could practice magic freely without fear of persecution or death.  It’s literally a land bursting with magic, and most beautiful place in existence, at least on the surface.  That much magic comes with a price, a heavy price.

Do you have a favorite scene in ALPHA: MISFIT’S RISE ?

I’ve always loved writing the final fight scene, especially since one of my favorite characters, mentioned below, has a chance to quip through the whole thing.  It also gave me a chance to push Billie to her physical, mental, and emotional limits— and that was an exciting place to go.

Though I’ve got a lot of characters for a lot of different books my favorite from Alpha is Sedna.  Though she’s technically an antagonist to Billie, my MC, Billie finds herself empathizing with Sedna quite a bit, though she may not agree with Sedna’s methods.  Sedna’s thirst for justice but lack of a moral compass makes her extremely fun, and liberating, to write about.  Plus she gets all the best lines.

The hardest for me to write was Lucian, Billie’s mentor and sometimes only ally.  It took me a while to really understand him, and he’s pretty elusive so he didn’t help me out at all in the process.   I spent more times re-wrting the Lucian scenes than any others, but he seems pretty happy with the results.  At least, he’s not longer insulting my abilities as a writer, which I take to be a good sign.

I plan to release the next book in the Alpha series, Trickster’s Song, in November 2019. I also have another project, Celestial: Vault of Souls that I hope to release in 2020. Vault of Souls is set in New Orleans and follows a teenage Witch, Ed, who is willing to dabble in strange magic for the chance to see his dead parents again. Only it turns out his parents were messing around with much dark magic first, and it has had dangerous consequences.  The Witch Council has decided Ed should pay for those consequences. With his life. 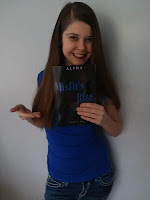 Sara's enjoyed creating fantastic stories since she was old enough to hold a play sword, around the time she learned how to walk. Gradually she learned to direct her creative energy into writing, and it’s been a downward spiral ever since then. When she's not writing she’s probably either dancing or reading random wikipedia pages. She also enjoys spending time in her part-time home away from home, Yellowstone National Park, which is the most fantastical land she's ever been too. 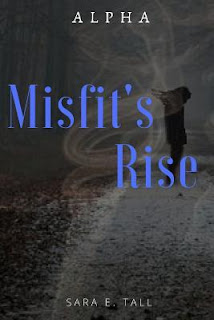 
A Half-Fae misfit returns to the Magical Realm of her birth to discover it’s far from the fairy tale she imagined.

century after the Mages of Earth found sanctuary in an underground Realm, those whose magic is sub-par or whose half-breed heritage leaves them powerless and forced into exile back on Earth. They can’t have them tainting the magic of the others, after all.

As a Fae/Human hybrid, Billie should fit right in. Except, she’s anything but powerless, making her a misfit among misfits. When her powers nearly destroy a human home, she's given a chance to return. Returning to the Realm has always been Billie’s dream, but the Realm is anything but a fairy tale.

Despite its claims of acceptance and equality, ancient rivalries between the Realm’s magical species are threatening to rip it apart. Billie somehow manages to land herself in the middle, a dangerous place for an outcast to be. What’s more, the powerful magic that brought her there suddenly vanishes, leaving her vulnerable to the attacks of those who think a misfit doesn’t belong in the Realm.

Staying in the Realm is her only chance to live life as a true Mage, but it could cost her life.