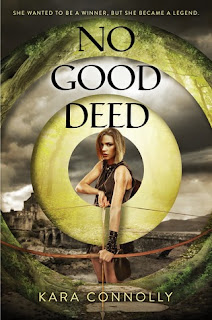 
Fans of Dorothy Must Die will love this reimagining of the legend of Robin Hood. Girl power rules supreme when a modern girl finds herself in the middle of a medieval mess with only her smart mouth and her Olympic-archer aim to get her home.

“This cheeky take on the Robin Hood legend is pure fun. Connolly’s swashbuckling debut will satisfy any adventure fans.” –Booklist