Review: Dragons Among Them by Kyra Jacobs 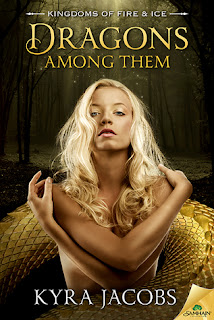 
Prince Zayne Godfrey, heir to Edana’s throne, is betrothed to the lone princess of rival kingdom Forath. While his heart is not in the arranged marriage, he will do his royal duty.

When he finds a beautiful stranger cornered by a pack of wolves, he doesn’t hesitate to shift into his golden dragon form to save her. She thanks him by taking one look at him and fainting dead away.

Photographer Adelaide Miller is in England for a career-making shoot when a bizarre jogging mishap lands her in a dangerous, medieval-like world of royals, wizards and dragon-shifting men. Her first instinct is to find her way back, but the fire-breathing prince intent on protecting her threatens to melt her heart.

Zayne’s burning passion for Adelaide not only jeopardizes the fragile peace between two kingdoms, it uncovers a ruthless plot to destroy his family. Remaining together may change Adelaide’s very definition of home—and expose one searing secret that could forever shift the balance of power in Zayne’s world.

When I saw that one of my favorite authors Juliette Cross gave DRAGONS AMONG THEM 5 stars, I knew I had to read it.

It was easy to connect emotionally with Adelaide. The world she finds herself in is definitely hard for her to believe, but she makes it work for her while also trying to find a way home. I liked how Adelaide was able to connect with the secondary characters in DRAGONS AMONG THEM and win them over even though they weren't very fond of her in the start. There is just something about her that you can't help but like and want to get to know. Zayne is extremely loyal and very protective. It's not hard to imagine why Adelaide would fall for him.

The romance between Adelaide and Zayne had a lot of ups and downs, but I thoroughly enjoyed it. They are highly attracted and drawn to each other, but Adelaide expects to go back home to her world and Zayne has an obligation to his family and kingdom to marry another. They don't stay away from each other long, but there are a lot of up and down feelings on both sides.

DRAGONS AMONG THEM started off the Kingdoms of Fire and Ice series well. I'm hoping that future books will continue to follow Zayne and Adelaide, but either way I look forward to reading more.