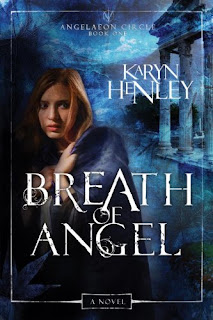 The stranger’s cloak had fallen back, and with it, a long, white, blood-stained wing.
When Melaia, a young priestess, witnesses the gruesome murder of a stranger in the temple courtyard, age-old legends recited in song suddenly come to life. She discovers wings on the stranger, and the murderer takes the shape of both a hawk and a man.

Melaia finds herself in the middle of a blood feud between two immortal brothers who destroyed the stairway to heaven, stranding angels in the earthly realm. When the feud turns violent and Melaia becomes a target, she finds refuge with a band of angels attempting to restore the stairway. But the restoration is impossible without the repayment of an ancient debt—the “breath of angel, blood of man,” a payment that involves Melaia’s heart, soul, and destiny.

BREATH OF ANGEL was a neat story. While reading int he beginning I wasn't quite sure what I thought about the whole concept of Melaia being a priestess and the introduction of the angels but it ended up flowing together pretty well. I enjoyed the mixture of modern and old, It wasn't really one way or the other but ended up being its own time and it blended the world together well. Melaia grew up wanting to travel but didn't think it would happen until she was pretty much sold to the king and sent off to another area. I felt Karyn did a good job of describing the places in the book so  you could picture them as Melaia traveled. One of the things I had issues with was the flow of the plot. I felt kind rushed and scrunched at times and stretched and drawn out at other times like things had to be cut or filled to fit as needed. I also felt there was a lot of different things going on that kinda made some things unbelievable. I would give you examples but there would be some major spoilers in them so I will just leave it at that. I enjoyed the different type of characters. There were angels, Nephilim, shifters, as well as some other creatures no one has ever used before called a Drak which is a bird like creature with human hands, the human hands being from the person that the Drak was made form. Kinda creepy but fits the book well. All together BREATH OF ANGEL really was a neat and different take on how Angels came to be on earth with different myths that kept me interested. I would like to see what comes next in Melaia's life.