UFI welcomes Delilah Dawson Author of Wicked as They Come. Thanks for Joining us!!

I have synesthesia, which means that my senses are crossed. Every number and letter has a distinct color for me, and numbers also have feelings. For example, 5 is a deep azure blue, cold and unfriendly. My favorite number is 22, which is warm, tawny gold, like a lion. I’m also very big on smells, which is why I approached Villainess Soaps for a collaboration (http://villainess.net/wicked/). You can now smell Criminy, Tish, or Tabitha in perfume and soap form. Criminy’s my favorite, of course, and I just about sniff myself unconscious every time I’m wearing it.

I don’t have that much down time, since I started writing—my obsession and hobby is also my work. I love reading, of course. And I really like having adventures, like traveling, going zip lining, or roller skating with my girlfriends. My all-time favorite thing to do is horseback riding, especially hunter paces, but my current life makes that nearly impossible.

I love when the idea is starting to come together, when I’m right on the verge of starting a new book. I get utterly obsessed with it—it’s like falling in love.

I love Charlaine Harris and Gail Carriger for paranormal. And I read a lot of YA, especially Cassandra Clare, Maggie Stiefvater, and Kiersten White. I also liked Karen Marie Moning’s Fever series—but not until book 4.

How would you pitch Wicked as They Come to someone who has not heard of it before?

Can you tell us a little bit about the world that The Blud Series is set in?

The world is called Sang, and it mostly runs on blood. The idea is that it’s a parallel universe to Earth, but somewhere along the line, a sort of vampirism got out of control. They don’t have germs or illness, but most of the wild animals are blood drinkers, as are lots of the people. There are also daimons and dragon people and all sorts of magic. Add in steam and clockwork technology, and it contains almost all the things I like in one tidy package. Even unicorns—in later books.

Do you have a favorite scene in Wicked as They Come?

I really like the scene where Tish first walks around the caravan. You get to meet some of the wacky side characters, and Criminy gets to show off his proudest accomplishment while trying to woo Tish. It’s kind of sweet, this dangerous apex predator/magician showing off his lizard boy to win over the girl he likes.

Criminy is my favorite, without a doubt. He pretty much writes himself. The hardest was probably Elvis, because he’s just a nasty little guy spouting prejudice. It felt yucky, having his words come out of my brain.

It looks like each book in The Blud Series will have different main characters. Will we still be able to see a bit about the main characters in Wicked as They Come in book 2? I have to admit I really loved Tish and Criminy and would love to know what happens next for them.

I’ll admit that I was surprised when the book sold in a 3-book series… and the next two books were supposed to be about someone else. I could write Criminy forever, and I had this long character arc for Tish as her grandmother became a Bludman and was stolen away by a time-traveling witch doctor, and… it didn’t happen.

But they will make cameos. There’s a novella out in October called The Mysterious Madam Morpho that takes place entirely in the caravan and kicks off with a scene of Crim and Tish living together. And if you read the excerpt in the back of Wicked as They Come, you’ll see that the second book, Wicked as She Wants, follows a much-changed, much humbled, much debauched Casper on his quest to find salvation with a strong female lead based on the legend of Princess Anastasia. I’m hopeful that, if the books do well, there could be opportunities for deleted scenes or more novellas, because there are so many adventures that Crim and Tish never got to finish.

I have two books in the works right now. One is a clockpunk romance version of Robin Hood, and the other is a YA paranormal set in Savannah. I’ll let y’all know as soon as something sells! 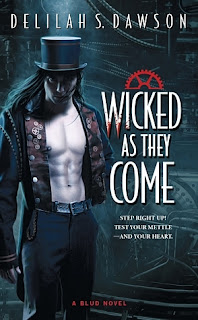 
Have you ever heard of a Bludman? They’re rather like you and me—only more fabulous, immortal, and mostly indestructible. (They’re also very good kissers.)

When Tish Everett forces open the ruby locket she finds at an estate sale, she has no idea that a deliciously rakish Bludman has cast a spell just for her. She wakes up in a surreal world, where Criminy Stain, the dashing proprietor of a magical traveling circus, curiously awaits. At Criminy’s electric touch, Tish glimpses a tantalizing future, but she also foresees her ultimate doom. Before she can decide whether to risk her fate with the charming daredevil, the locket disappears, and with it, her only chance to return home. Tish and Criminy battle roaring sea monsters and thundering bludmares, vengeful ghosts and crooked Coppers in a treacherous race to recover the necklace from the evil Blud-hating Magistrate. But if they succeed, will Tish forsake her fanged suitor and return to her normal life, or will she take a chance on an unpredictable but dangerous destiny with the Bludman she’s coming to love?