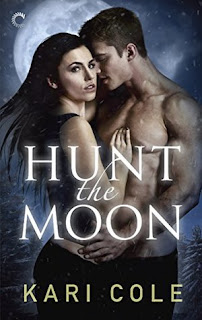 Who’d think to bring silver bullets to a wedding? When Isabelle “Izzy” Meyers arrives in Montana and discovers her human foster brother is marrying into the local werewolf pack, she wishes she’d brought an arsenal. Werewolves can’t be trusted, and Izzy should know…she is one.

Luke Wyland never planned on becoming an Alpha. He’s still navigating how to protect the pack from the rogue threat that’s been hunting in his territory, claiming his father as one of their victims. Yet the moment Luke lays eyes on Izzy, something primal takes root. Finding a mate who wants nothing to do with him is a complication he doesn’t need, but letting Izzy go isn’t an option.

After a childhood marred by shifter violence, Luke is everything Izzy was raised to hate. So then why does being with him feel so intensely right? With a thinning pack to defend, Luke knows what he has to do: embolden Izzy to unleash her true nature—or risk losing everything.


I very much enjoyed HUNT THE MOON

I really felt for Izzy. Learning about her life and the role that being a shifter played in her past was heartbreaking. It was easy to connect with her and feel her pain as she fought the beliefs and habits that were tortured into her.  Even when she was scared out of her mind she was there for  those that needed her and was willing to put herself in harm's way quite often. I really loved how Luke treated her and stood by her even though she pushed him away. I also really loved meeting and learning about her family.

Luke had that sexy alpha male feel to him, but he wasn't super pushy or overly full of himself. He was protective, yet willing to step back and watch. Their connection was pretty instant, but their romance was slow and turbulent. It was fun watching them navigate and learn each other.

The very first meeting between Izzy and the pack was pretty priceless. I was both horrified and amused at the same time. Definitely entertaining and I found myself entertained during many parts of the book. It wasn't needed, but I would have actually loved a prequel to HUNT THE MOON showing us how Freddie met and fell in love with Rissa. It would have been a nice intro to the Mated by Fate world and it's characters. Especially considering the role some of the pack members plays in HUNT THE MOON.

I plan to read more.