UFI welcomes Cassi Carver Author of The Shadow Slayers Series. Thanks for Joining us!!


Thank you so much for inviting me to visit Urban Fantasy Investigations today to tell you a little about me and my new book that’s coming out next week—Dark Flight!

First I should go back to the beginning… When I was born—okay, hold on. That may be a little too far back. How about when Book 1 of the Shadow Slayer series was born instead? Book 1 in the series, Slayer’s Kiss, came at a time in my writing journey when I was reading a ton of urban fantasy, but I’d never stopped reading romance, either.

I started thinking about how I wished there was more romance in some of my favorite UF series, and yes—even more sex. I mean, does it ever frustrate you that so many UF heroines lead these virginal lives while they’re out there kickin’ bad guy booty? Well, it bothered me. And I started wondering what would happen if I took the things I loved from urban fantasy and spiced it up. Way up! And that’s how Slayer’s Kiss and the Shadow Slayers series was born.

Kara, the heroine, had lived her life separated from her own very sensual species, and when two hot neighbors move in next door—two men who just happened to be sent to protect her from a sadistic not-quite-human killer—Kara’s hormones go into overdrive.

I’ll warn you right off the bat that there is a love triangle in this series. It’s a love triangle that has made readers both swoon and “want to chuck their e-reader across the room” as they navigated the complex relationship between one woman and the two best friends who love her. One hero is noble and self-sacrificing. The other is too in love and in lust to deny what he wants.

Gavin and Julian, the heroes of this series, have about an equal number of fans on their “teams,” but you know the best part about writing Dark Flight? I think both Team Julian and Team Gavin are going to walk away with a smile. At least, I hope so. I couldn’t stop smiling after writing Dark Flight. So here’s to hoping you’ll give the series a try and journey with Kara as she struggles with a newfound sexuality, the loss and rediscovery of those she loves, and ultimately, a metamorphosis that will change life as she knows it.

As a thank you for stopping by, I would like to give a free digital copy of Dark Flight to one person who comments today! Tell me, who are some of your favorite urban fantasy authors and can you remember a love triangle that stuck out in your mind? If that just fried your brain, then just say hi—that works, too. ;)


When Cassi isn’t busy plotting or writing, she enjoys reading, spending time with family and friends, caring for pets, getting outdoors, and watching sappy movies that deliver reliably happy endings. 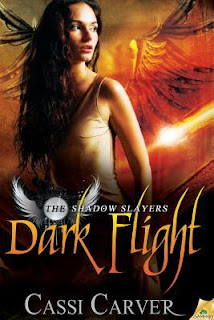 
Kara has been training for months to help take down Brakken-the merciless black-wing who is making life hell for the Demiare. But when Julian discovers a scout has been tracking Kara, he wants her out of the fight-even if it means breaking her heart in the process.

Gavin isn't much better. He's already lost so much to Brakken and has no intention of allowing the woman he loves to be the next sacrifice. He and Julian have their hands full trying to fight Brakken's army and keep Kara safe, especially after her recent visit to the mythical white-wings. Since her return, she's been acting decidedly...strange.

With a terrible battle looming, Kara doesn't have time to think about her conflicted feelings for Gavin and Julian-or the fact that she's developed an unnatural taste for Gavin's blood. But if she thought it was complicated evading mysterious scouts and fending off vicious black-wings, she's learning that's nothing compared to loving two strong-willed men.

Warning: This book contains angels that aren't what they seem, a heroine with mad midwifery skills, and a metamorphosis that will change life as we knew it. 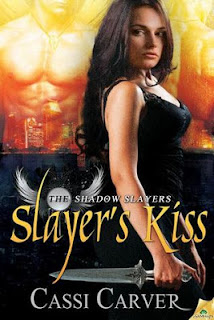 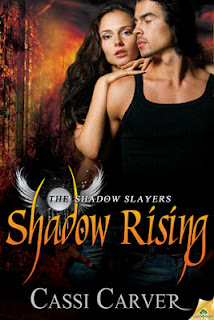