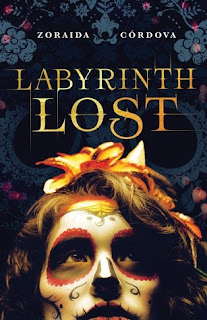 "Enchanting and complex. Every page is filled with magic."-Danielle Paige, New York Times best-selling author of Dorothy Must Die

Nothing says Happy Birthday like summoning the spirits of your dead relatives.

Alex is a bruja, the most powerful witch in a generation...and she hates magic. At her Deathday celebration, Alex performs a spell to rid herself of her power. But it backfires. Her whole family vanishes into thin air, leaving her alone with Nova, a brujo boy she can't trust. A boy whose intentions are as dark as the strange marks on his skin.

The only way to get her family back is to travel with Nova to Los Lagos, a land in-between, as dark as Limbo and as strange as Wonderland...


With a quirky storyline LABYRINTH LOST introduced us to an interesting group of characters and a world filled with fantasy, danger, intrigue and laws unlike our own.

Although Alex, the main character, never really made me love her, I liked following her on her journey to save her family. The things that made me keep reading LABYRINTH LOST was the imaginative world, supporting characters and the need to find out if Alex and her friends would succeed in making things right.

I was pretty surprised with the way the romance in LABYRINTH LOST turned out. I really didn't see it coming and was left wondering if I missed the signs or if they weren't there to begin with. Not that the romance was bad, just didn't feel like a very smooth transition to me and I didn't really feel the connection between the characters. It felt more forced than anything.

LABYRINTH LOST IS a young adult novel—so it's hard to fault it—but I did have an issue with the immature feel of some of the characters at a few points in the book. They would switch from being totally sensible and seem older than their age, then they would do something totally ridiculous that made them seem younger. I wish it would have been a little smoother in that regard. On top of that, Los Lagos sometimes felt way too ridiculous to be real. It was highly imaginative and reminded me a lot of Alice's Wonderland—especially the tea party scene—, but some stuff just felt unbelievable. But again. It's a young adult story, so you have to take this part of my review with a grain of salt.

The magic of the story definitely was what I loved most about LABYRINTH LOST, but it didn't really make me love it enough to read more stories going forward.