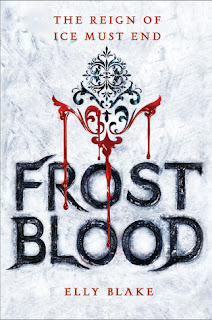 
Seventeen-year-old Ruby is a fireblood who must hide her powers of heat and flame from the cruel frostblood ruling class that wants to destroy all that are left of her kind. So when her mother is killed for protecting her and rebel frostbloods demand her help to kill their rampaging king, she agrees. But Ruby's powers are unpredictable, and she's not sure she's willing to let the rebels and an infuriating (yet irresistible) young man called Arcus use her as their weapon.

All she wants is revenge, but before they can take action, Ruby is captured and forced to take part in the king's tournaments that pit fireblood prisoners against frostblood champions. Now she has only one chance to destroy the maniacal ruler who has taken everything from her and from the icy young man she has come to love.

Fast-paced and compelling, Frostblood is the first in a page-turning new young adult three-book series about a world where flame and ice are mortal enemies—but together create a power that could change everything.

Fire and Ice combine in FROSTBLOOD. I found it both entertaining and frustrating, full of action and low key scenes and most of all great characters to lead you to the end.

Ruby was easy to like and I found her to be pretty strong in character. She isn't the most adept when it comes to her skills, but she did a good job of trudging through. She fought for herself and those worthy of it.  Arcus is frustrating and comes off cruel, but give it time and get to know him. There is definitely a love/hate thing going on between him and Ruby for a while. Ruby has a temper and Arcus has secrets he is trying to hide which makes for some pretty explosive scenes. The sweetness comes out and the passion is just as explosive as the conflict between the two.

Let's talk about the world. It was well built and the explanations were point on in helping me imagine everything as the story progressed. I found the story to be exciting and original. I have seen a lot of reviews comparing FROSTBLOOD to other stories, but I found it to be pretty original.

I enjoyed reading FROSTBLOOD and look forward to the sequel.