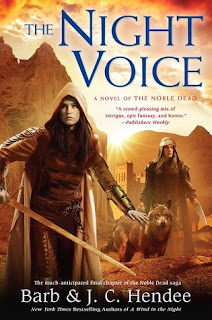 With much relief, Magiere, Leesil, and Chap prepare to hide the last two of the powerful orbs. Once this last great task is completed, Magiere can take Leesil home to a life of peace.

Then, rumors reach them that a horde of undead creatures, slaughtering everything in their wake, are gathering in the far east regions of the Suman desert. This gathering could only be caused by the Ancient Enemy awakening.

With no other choice, Magiere tells Leesil they cannot go home yet. They must go to the desert and seek to learn if the rumors are true . . . and if so, face an awakening evil: The Night Voice.


PRAISE FOR THE NOBLE DEAD SAGA:

“[The Noble Dead Saga is a] mix of The Lord of the Rings and Buffy the Vampire Slayer.”
—New York Times Bestselling Author, Kevin J. Anderson

“The Noble Dead Saga…is no simple myth, but rather a true epic, which stands at the highest levels of fantasy lore.”
—BSCreview

“A series that will appeal to both horror and fantasy fans.”
—SF Site

Barb and JC. Hendee live in Oregon. Barb is the author of the Vampire memories and Mist-Torn Witches series. Her short fiction and J.C.’s poetry, nonfiction, and short fiction have also appeared in many magazines and anthologies. Visit them online at www.nobledead.org or on Twitter at @NobleDeadOrg.