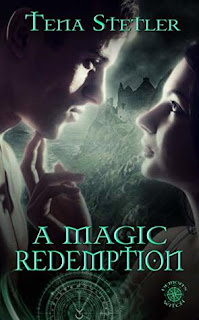 
Synn, a demon, carries extraordinary magic and power, but there is more within her than she dreams. Kidnapped as a child, her captors murdered her family and forced her into training as a warrior assassin.

When an assignment goes horribly wrong, she finds herself at the mercy of the friends and family of her intended target. Offering valuable information in exchange for protection, she gains her freedom, but it is not without its challenges.

Gavin Shaughnessy is the publican at his family's Irish pub. He is certain Synn is meant to be his and isn't bothered by her past. He must find a way to convince her their future together is stronger than the dark memories that haunt her dreams.

When her past comes calling for revenge, will their love survive the raging inferno she brings down upon them? Or will the searing path of destruction destroy all they hold dear?

Time seemed to go on forever as she slowed and walked backward for a while, her foot steps in the sand filling with water as she traveled along the shoreline, as if nature erased her intrusion. She turned around and continued her trek. Unaware of how long or how far she'd walked, the sudden outline of a figure, cloaked in the fog, jogging toward her caused panic to set in. Her heart pounded rapidly in her chest, she swallowed hard, adrenalin pumping through her veins as flight or fight response kicked in. Digging her good foot into the sand she prepared to attempt a sprint…to where. Where the hell am I? A quick glance around, she spied a light from a familiar building far off on the bluffs as the figure burst from the fog. A tall, wide-shouldered male with long muscular legs came closer. She froze.

Once lithe, strong and agile in her former life, a boss’s retaliation had taken a toll on her body. Now tired her gait was uneven and unsteady, even a slow sprint would likely end with her

Tena Stetler is a best-selling author of award winning paranormal romance. She has an over-active imagination, which led to writing her first vampire romance as a tween to the chagrin of her mother and delight of her friends. After many years as a paralegal, then an IT Manager, she decided to live out her dream of pursuing a publishing career.

With the Rocky Mountains outside her window, she sits at her computer surrounded by a wide array of witches, shapeshifters, demons, faeries, and gryphons, with a Navy SEAL or two mixed in telling their tales. Her books tell stories of magical kick-ass women and mystical alpha males that dare to love them. Well, okay there are a few companion animals to round out the tales.

Colorado is home; shared with her husband of many moons, a brilliant Chow Chow, a spoiled parrot and a forty-five-year-old box turtle. When she’s not writing, her time is spent kayaking, camping, hiking, biking  or just relaxing in the great Colorado outdoors. During the winter you can find her curled up in front of a crackling fire with a good book, a mug of hot chocolate and a big bowl of popcorn.