Review: Fire and Bone by Rachel A. Marks 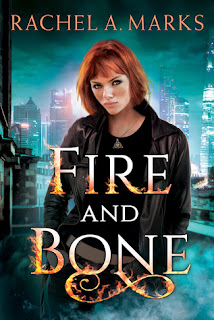 In Hollywood’s underworld of demigods, druids, and ancient bonds, one girl has a dangerous future.

Sage is eighteen, down on her luck, and struggling to survive on the streets of Los Angeles. Everything changes the night she’s invited to a party—one that turns out to be a trap.

Thrust into a magical world hidden within the City of Angels, Sage discovers that she’s the daughter of a Celtic goddess, with powers that are only in their infancy. Now that she is of age, she’s asked to pledge her service to one of the five deities, all keen on winning her favor by any means possible. She has to admit that she’s tempted—especially when this new life comes with spells, Hollywood glam, and a bodyguard with secrets of his own. Not to mention a prince whose proposal could boost her rank in the Otherworld.

As loyalties shift, and as the two men vie for her attention, Sage tries to figure out whom to trust in a realm she doesn’t understand. One thing is for sure: the trap she’s in has bigger claws than she thought. And it’s going to take a lot more than magic for this Celtic demigoddess to make it out alive.


Although it took me a little bit to get into the story, FIRE AND BONE ended up being entertaining.

I almost gave up on FIRE AND BONE when I first started reading, but decided to keep going. I ended up enjoying the world, the mythology and the characters. Sage had a lot of mystery to her. She doesn't know much about herself and we learn about it along with her. I will admit that a lot of things were confusing until more was explained—which could be frustrating—but I' glad I stuck with it.

I can't say the romance was my favorite part of FIRE AND BONE. It isn't heavy on romance, but the romance that does take place happens to be a triangle. Ugh a triangle. As with most triangles, I like one and don't care for the other.

With slow reveals, interesting characters and a unique storyline, FIRE AND BONE was a great start to a new urban fantasy series.