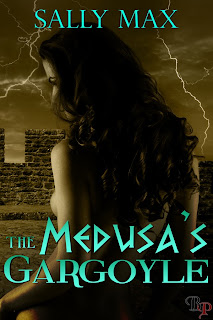 
Legend has it that anyone that looks upon a medusa will never live to tell the tale. However, fate has different ideas...

Drucilla, a medusa-human shifter, is unable to control her transformations, which puts every living creature near her in danger of becoming stone. Her sisters have given her ten years to teach herself how to control it, but she is down to her last few days, and still cannot do it.

Az, a gargoyle, is cursed to turn to stone every sun rise and to only be released from his rock tomb every sunset. He is the only living being that Drucilla has seen survive her medusa stare. Can he help her control her shifts or will she be forever alone, too afraid to face anyone ever again?

She had followed him. If they found out she was the one—

The mob stopped, placing him in the middle of the two statues. Someone behind him ripped off the cloak, revealing his true self. Az took the moment of surprise to raise his wings. His wingspan was massive, at least two or three times his height. Drucilla had taken the opportunity to sneak out of the alley toward the crowd. He rushed over to her, grabbing her and hugging her tight to his chest as one would do a captive.

She squealed and struggled. Her hair whipped around her head in a flurry of its own.

"Change now," he breathed in her ear.

Feeling her tense, then release, her hair sank down atop her head.

"He has a hostage!" A woman yelled from the crowd. The mob quieted as he maneuvered himself back toward the statues. The archers surrounded him in a circle and he was afraid of them getting a bit too anxious with their arrows.

Drucilla had dropped her head so that her hair fell over her face. The shift of her body, rubbed against him and he found himself reacting to her warm presence.

"By the gods..." Az mumbled under his breath.

It made her turn, rubbing her warm behind against his lower regions. He felt himself harden.

"Why—" she moved slowly in his arms, and she must have felt why. "Oh."

After not being able to answer, “What do you want to be when you grow up?” when she was little, Sally Max decided she wouldn’t settle on just one profession. Instead, she lives vicariously through her characters on the page, and gets a taste of every possible scenario she can imagine.