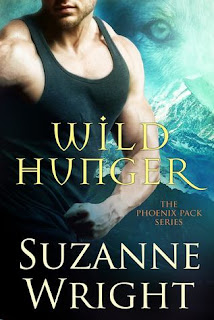 When half–wolf shifter Frankie Newman receives an e-mail from a family member she didn’t know existed, a secret is revealed: as a child, Frankie witnessed her father killing her mother…and then himself. Frankie was torn from her pack by her mother’s human relatives, and the trauma was erased from her memory. Realizing that she’s been lied to her entire life, she’s never felt more alone. Until she catches the scent of an old friend—warmly familiar and intoxicating.

Trick Hardy, enforcer of the Phoenix Pack, can sense the rush of mutual attraction when he sees Frankie again. He knows immediately that she’s his true mate. But he also knows that, given her fragile state, he needs to tread with care—no matter how fierce his surging desires.

As aroused as Frankie is by Trick’s darkly dominant air and simmering desire, her priority right now is her past—not her future, no matter how tempting. But as more secrets emerge and Frankie’s life is threatened, Trick must do everything he can to keep her close and safe. After all, it’s their destiny.


Both the Phoenix Pack and Mercury Pack series continue to be must reads for me. In fact, there hasn't been a series from Suzanne Wright that I didn't fall in love with.

Trick is just like all the other alpha males in the pack. Stubborn, dominant, set in his ways, but also really sweet and willing to take a step back when its called for. I found his willingness to give Frankie time to figure things out quite refreshing. Don't get me wrong, he was there for every moment, but he didn't push her for anything she wasn't ready for.  Frankie fit right in with the other woman of the Phoenix Pack. I loved her snark, her interactions with Trey's mom, and her determination at every step of the book. Together they made a really cute, strong couple and worked really well together.

I enjoyed the mystery of WILD HUNGER. I had some clues about what was going on after a bit, but I still thoroughly enjoyed the big reveal. We also get the big action scene at the end that we're used to with this series, but it came on multiple fronts which was a nice surprise.

If you are new to either this or the Mercury Pack series, make sure you read them in release order. They compliment each other perfectly and you can get your fix quicker by reading both. There are only a few Phoenix Pack members left to find their mates, but I will be reading about them as soon as I am able to get my hands on them.