UFI welcomes Author Jill Criswell. Thanks for Joining us!!

I’ve always been captivated by heroes and heroines from sci-fi and fantasy stories, and it’s shaped some of the most important decisions in my life. I was determined to travel the world after watching Indiana Jones movies as a kid. I starting working out and took martial arts because it made me feel more like my favorite female warriors—Ripley, Sarah Connor, Valeria (from the Conan series). I started writing because I wanted to make my own characters and stories that were like the ones I loved.

I read a lot, especially young adult fantasy (currently reading The Merciful Crow by Margaret Owen, and loving it). I try to work out every day to stay in shape. I hang out with my husband and my daughter, and if I have any extra time, I like to binge-watch shows (currently catching up on season 6 of The 100).

When something surprises me! Sometimes I think I know what’s going to happen in my story, and then my characters go off-script or something I never planned for drops in like a bomb. Once a writer creates a world and characters, they really do take on a life of their own.

It often depends on the scenes I’m writing. Usually I need music that fits the scene’s mood. Sometimes the words come easily and I write straight through for hours, sometimes I take lots of breaks to mull over details and plot points. I have a convertible desk, so sometimes I stand up to write and sometimes I sit down. Sometimes I drink hot coffee, sometimes cold coffee. Whatever keeps me writing is what I do.

For urban fantasy, I love Karen Marie Moning, Ilona Andrews, and Sarah Fine. For high fantasy, I love Juliet Marillier, Jacqueline Carey, Leigh Bardugo, and Sabaa Tahir. Recent books that knocked me off my feet are The Fever King by Victoria Lee, The Traitor’s Kiss by Erin Beaty, and The Cruel Prince by Holly Black.


How would you pitch BEASTS OF THE FROZEN SUN to someone who has not heard of it before?

Beasts of the Frozen Sun is a young adult fantasy inspired by Viking invasions in Ireland. It's about Lira, a chieftain’s daughter with the power to read a person's soul, who saves Reyker, a foreign invader sent to attack her village. Despite being from enemy nations, they begin to care for each other. But Lira’s father and Reyker’s warlord will do anything to keep them apart, forcing them to choose between loyalty and love, between the fates of their countries and the desires of their hearts.


Can you tell us a little bit about the world that the FROZEN SUN SAGA is set in?

Glasnith (based on ancient Ireland) is an island nation divided into villages ruled by chieftains, the patriarchs of powerful clans. In every clan, one female magic-bearer is born each generation—the Daughters of Aillira—to help protect Glasnith in the name of the True Gods. Glasnith has a bloody history of wars between gods and men that ravaged the lands a thousand years earlier.

When a tribe from the Frozen Sun (based on ancient Iceland) invades, Glasnith’s clans turn on one another, and the island falls into chaos. Blood spills, gods walk the earth once more, and a new war between mortals and immortals begins that threatens to destroy Glasnith and its people.

Do you have a favorite scene in BEASTS OF THE FROZEN SUN?

There’s a scene where Lira winds up a hostage of one of Reyker’s arch enemies. It’s very cinematic and has a great mix of all the things I love to write—an action-packed emotional battle scene, followed by romantic confessions and a bit of kissing. There’s a lot of meaning packed into a handful of pages, and I had a great time writing it.


Which one character out of all your books was your favorite to write about? What about the hardest to write about?
It's hard to choose between Lira and Reyker. Lira starts out an idealist, but as the people she cares for die or betray her and the gods she worships use her as a pawn in their schemes, her character gets darker and darker. Reyker has already hit rock bottom, and his journey is about clawing his way back to redemption, with many setbacks and relapses along the way. Both of them are flawed and struggling through tragedy and trauma, which made it fascinating to write from their points of view.

Lira’s father, Torin, was the most difficult to write because he’s neither a hero nor a villain, but has aspects of both. He wants power and status, but in his mind, it’s a required tool to protect his people. He does horrible things to achieve this power, but he thinks the ends justify the means. I wanted him to be monstrous, but still sympathetic and honorable, and that was a hard line to straddle.

Right now, I’m focused on promoting Beasts of the Frozen Sun and finishing up work on the sequels (which should be released in 2020 and 2021, respectively). But I do also have a draft of a Hindu-inspired young adult fantasy sitting on my computer, just waiting for some attention, so I’m hoping to polish that up and make it my next book project. 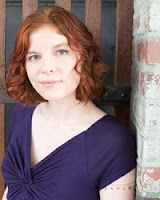 Jill Criswell is a writer of Young Adult Historical Fantasy. She was born and raised in the swamps of northeastern Florida. She earned degrees in English and Psychology and an MFA in Creative Writing from the University of Central Florida. Her greatest passion, besides reading and writing, is traveling the world; she's visited fifty countries across six continents, falling in love with places like Iceland, Namibia, and Cambodia. She works as a university English teacher and lives in South Carolina, near the foothills of the Blue Ridge Mountains, with her husband and daughter (who is named after a volcano in Iceland). 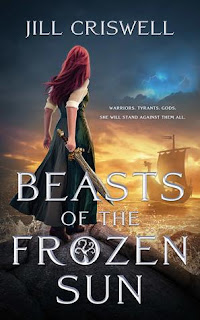 Burn brightly. Love fiercely. For all else is dust.

Every child of Glasnith learns the last words of Aillira, the god-gifted mortal whose doomed love affair sparked a war of gods and men, and Lira of clan Stone knows the story better than most. As a descendant of Aillira and god-gifted in her own right, she has the power to read people's souls, to see someone's true essence with only a touch of her hand.

When a golden-haired warrior washes up on the shores of her homeland--one of the fearful marauders from the land of the Frozen Sun--Lira helps the wounded man instead of turning him in. After reading his soul, she realizes Reyker is different than his brethren who attack the coasts of Glasnith. He confides in her that he's been cursed with what his people call battle-madness, forced to fight for the warlord known as the Dragon, a powerful tyrant determined to reignite the ancient war that Aillira started.

As Lira and Reyker form a bond forbidden by both their clans, the wrath of the Dragon falls upon them and all of Glasnith, and Lira finds herself facing the same tragic fate as her ancestor. The battle for Lira's life, for Reyker's soul, and for their peoples' freedom has only just begun.