UFI welcomes Decadent Kane Author of The trouble with elves series. Thanks for Joining us!!

As my elfish heritage allows me to keep a whisp as a pet in the elfin realm, here I'm not so lucky- instead I own three dogs and a cat. (All of them think they belong in a lap no matter how big they are.)

Reading books, looking at funny videos, and wandering around the internet.

No music and my character has to have a name before I can write him or her.
What are some of your Favorite books or Authors in the Urban Fantasy/ Paranormal Genres?
Kresley Cole, Christine Feehan, Patricia Briggs, and Kim Harrison

How would you pitch Steele Your Soul: trouble with elves book 3 to someone who has not heard of it before?

An elfalicious Killian Jones look alike graces the pages as captain Joren Steele and the elfess, Pepper, has caught his eye. Someone else wants her too and her soul will be staked on both. Pirate booty has a whole new meaning when elves are involved...don't keep the captain waiting.

Can you tell us a little bit about the world that Steele Your Soul: trouble with elves book 3 is set in?

There is top side, which is above ground, and then the underground. The underground is where all the diseased drow elves live and they need souls in order to stay alive. Joren Steele goes both top and under smuggling their drow goods.

The elfin realm has one big city in the entire realm, otherwise elves and many other...creatures live in hand built cabins or trees around the city and within the city.

And the trees here....are so oversized a human family could live in one like they would an apartment building...only the elves carve them out and create homes inside the actual tree.

Do you have a favorite scene in Steele Your Soul?

This is going to sound crazy, but the ending scene with the drow king is my favorite. He shocked me so much it just sticks with me.

Joren was both my favorite and the hardest character to write. I loved his confidence, but the way he spoke made his dialogue hard to write.

An elfess in human form, Decadent enjoys dipping her fingers into the human realm where she took pen to paper and began the tales of the trouble with elves. Her obsessions include reading, Dean Winchester, and honey.

She will devour your soul with glimpses of the feral ridden drow elves, with their dark skin and soul consuming. She'll sneak morsels of naughty thoughts to you via goblins, and seduce you into stepping inside the elven realm where females disappear when lust takes over among other elfish troubles.

But never look a drow elf king in the eyes... 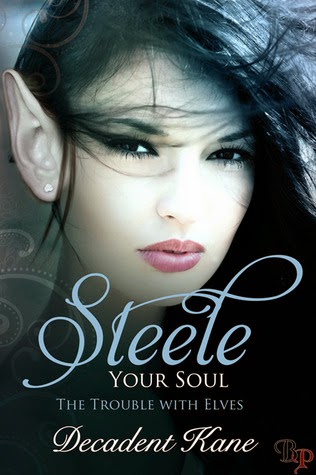 Steel Your Soul
The trouble with elves #3
Buy Link


When Pepper set out for the day, the last thing she expected was to come face to face with a pirate. But when she locks eyes with the Captain, she's ready to let him pillage or plunder whatever he wants. At least until his drow shipmate decided to steal her for himself.

Captain Joren Steele has a love for his ship, money, and females, usually in that order. When Pepper steps into his life, he's certain his love 'em and leave 'em status will remain intact. But when he discovers she's a victim of the drow, he has to make a choice. His ship or the elfess.


Pepper slammed into something solid. "Oaf." She fell on her rear and looked up.

Joren stood in front of her, tall, dark, and so hot.

"What are you doing, Tide?" His voice came out low.

Pepper peeked behind her. The drow had stopped.

"She's mine, pirate. Hand her over. You work for us. You have to do what I say."

Joren grinned. "Ye poxy bilge-sucker. I don't listen to ye. I help your king. He pays me to carry the cargo, not to hand over ladies to ye." His chest puffed out, and he set his legs apart, ready for a fight.

The drow didn't comment. Instead, he stepped over Pepper and slammed himself into Joren as he stomped off down the deck. Joren didn't budge or turn around to watch the elf go. His features softened, and he bent down on one knee in front of Pepper. Her heart skipped for an entirely new reason.

"Three saves in one day, me beauty. Ya owe me." He smiled and held out his rough hand to her.

She took it. "Three? I recall two. The crates and just now. Besides, I had the drow under control, so really, you saved me from the falling crates." She smoothed out her clothes and flipped her hair back. She should thank him, but he was so smug, looking over at her as if she was on the menu of his sexual dining experience.

Joren chuckled. A low sound, which lifted his shoulders. "Three, elfess." He pulled her grandmother's bag of spice from his front pocket and dropped it into her hands. He winked at her. "Iffin' ye had that drow under control, then what ye be doin' at me feet no more than a moment ago?"

Pepper raised an eyebrow. "You stepped in my way." She tucked the brown pouch into her pocket. She wanted off this wretched boat. She turned around and stormed away. The last thing she needed was to encourage a pirate. What did they do again? Oh, kill and loot, or pillage and plunder?

A hand spun her around by the elbow, and she found herself face-to-face with Joren and those blue eyes. He grabbed hold of her chin with his fingertips. "Wait a minute. I don't even get a thank you?" He frowned.

"Thanks." Pepper set her jaw.

"I be needin' something a little better than that. Tide will be back, and I will pay the brunt of saving your sweet little ass."

"What do you want?" She tried to break free, but he held fast.